LCL continues to aggressively drill out its Tesorito South prospect, a large, near surface, gold porphyry discovery in Colombia.

As drilling continues, the known gold envelope of its discovery continues to grow, and there seems to be no end in sight to the size of the deposit in three directions.

LCL has now reported over a dozen spectacular gold intercepts over the past year at its Colombian gold project, and has brought no less than four drill rigs on site to keep up the pace of exploration.

LCL is now cashed up and backed by the big end of town.... The recent raise saw the addition of two high profile North American gold funds, including the resources fund of top tier investment company, Franklin Templeton, which manages US$1.53 trillion in assets.

Yet somehow LCL is trading below 16¢ where institutional investors bought in July. That could be to do with gold sentiment in the broad market being flat of late... but that hasn’t stopped LCL from continuing to aggressively drill, and hit large thick gold intercepts.

That’s OK by us too, as we prefer to accumulate when commodity sentiment is down — awaiting a bounce back in the sector. And we know that gold will again have its time to shine.

And while the known porphyry (a type of gold-hosting rock deposit) at Tesorito South keeps expanding — and already looks like a multi-million ounce discovery — it might just be the bookend of a much larger gold system that includes the Miraflores deposit and Tesorito West prospect.

Here is a quick summary snapshot of where we are right now and what is happening next to prove if LCL has a monster gold system: 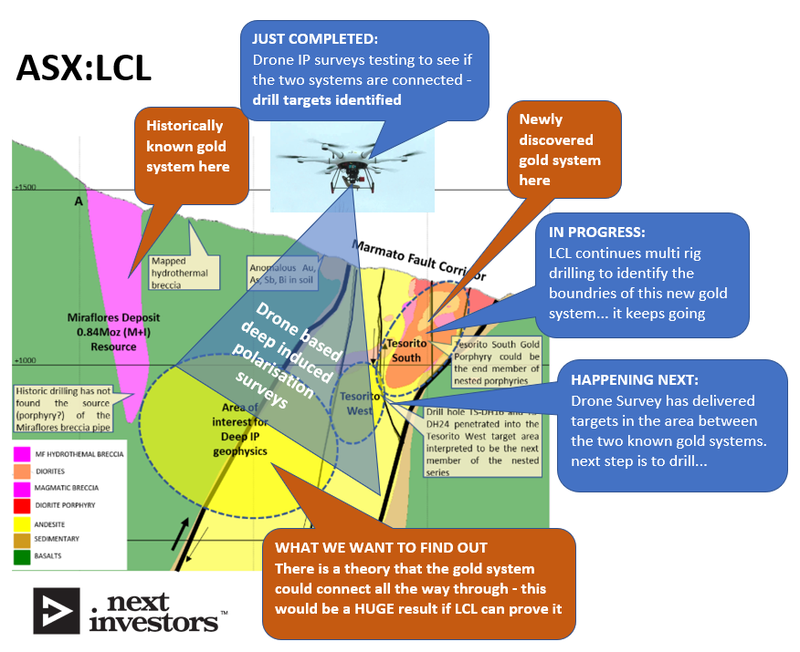 LCL has over $23M in the bank after a recent 16¢ share placement (we like companies that have a big chunk of cash in the bank in case of a market correction), and it has 4 drill rigs on site — it’s going as fast as it can.

Yet LCL is currently trading below its last placement price of 16¢.

We like that LCL is focussed in a region that hosts numerous world-class discoveries and operating mines, and is backed by several of the world’s leading mining funds as well as the US$6.4BN capped Anglogold Ashanti.

Since announcing a phenomenal discovery hole at Tesorito South (230 metres at 1g/t gold from surface) more than 12 months ago, LCL has been extending drilling in all directions so as to find the edges of the system.

Once the edges of the gold system are located, LCL can start to figure out just how much gold is there. The “problem” is that so far the gold is everywhere, and LCL has only found one edge to date.

For gold explorers, that’s a very good problem to have. 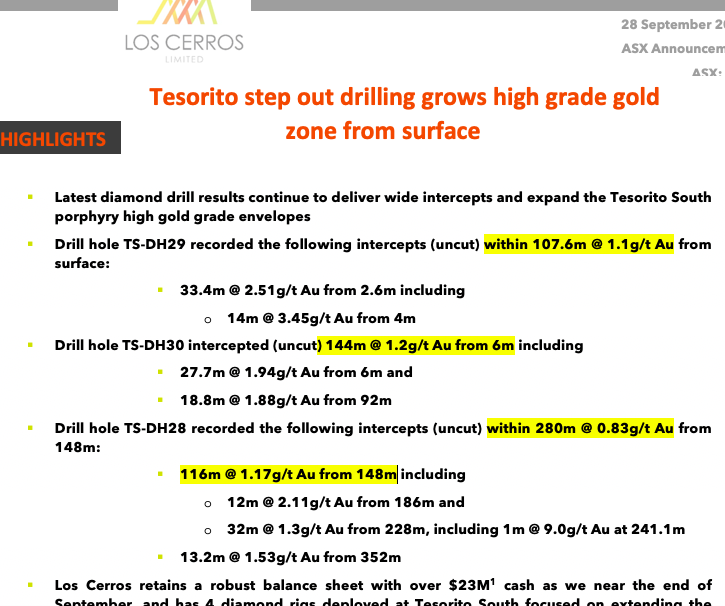 These results further strengthen the case for a higher grade gold system near surface at Tesorito South. This is significant, as it would benefit project economics should LCL seek early cashflow from a mine.

The bigger play however, and what we anticipate, is that this prospect keeps on growing and that a huge (say several million ounces gold) deposit can be identified.

In this scenario, a strategic partner/mining major could become involved.

We added LCL to our portfolio in April 2020, following its creation as the offspring of two smaller Colombian focussed juniors. We topped up our investment just before the inaugural Tesorito drilling program began in September 2020, watching the market reward the company for discovering Tesorito South by trebling its share price from 7¢ to 21¢ soon after.

Since then, and on the back of a string of stellar gold strikes over the past year, we further added to our holding in August 2021 as LCL raised ~$20M to accelerate drilling.

Let’s dig deeper into today’s announcement as well as the things to watch out for next.

LCL has updated the market on recent drilling from Tesorito South, its near surface gold porphyry discovery that is part of the company’s 100% owned Quinchia Gold Project in Risaralda, Colombia.

Quinchia contains a nest of targets with big potential all within a 3km radius.

Following its recent capital raise at 16¢, LCL has over $23M cash in the bank — plenty of cash to accelerate exploration across several of its prospects.

But given the numerous spectacular intercepts to date at Tesorito South, this remains the priority with 4 rigs now on site.

Justifying all these rigs at one prospect — and to illustrate just how impressive drilling has been here — the following table shows 12 intercepts of at least 200m wide and grading ~1g/t gold: 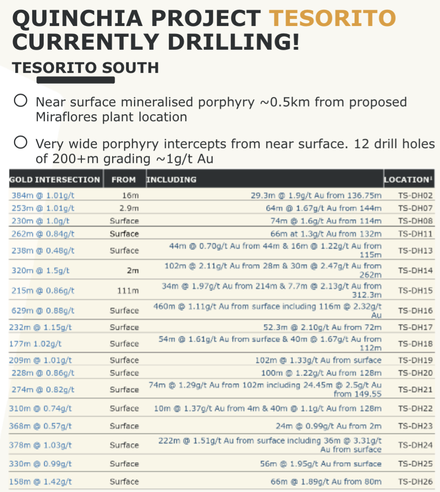 To put that in perspective, even just one such drill hole could be considered ‘company-making’ for an explorer.

So to have 12 such results we think is just an embarrassment of gold riches. And it highlights the immense potential of Tesorito South.

This is what has attracted interest from the bigger end of town, including a number of leading mining funds such as Franklin Templeton Investments’ Franklin Resources, Inc, recently joining the register. Franklin is a top tier investment company with more than US$1.53 trillion in assets under management, and widely considered one of the top five resources-centric funds globally.

LCL reported three new holes today, with three more impressive gold intercepts needing to be added to the above table:

Reporting stellar gold intercepts is becoming so commonplace for LCL that we suspect the market has become somewhat blasé. The stock is still trading below the 16¢ placement price that saw several international institutional investors added to the registry in July 2021.

To get an idea of just how big of a system LCL has on its hands, in the east side of the map below, you can see Tesorito South where all the drilling of the past year has been done.

LCL has now drilled right through that and out the other side ... yet it is still in porphyry. This is a second porphyry, Tesorito West. 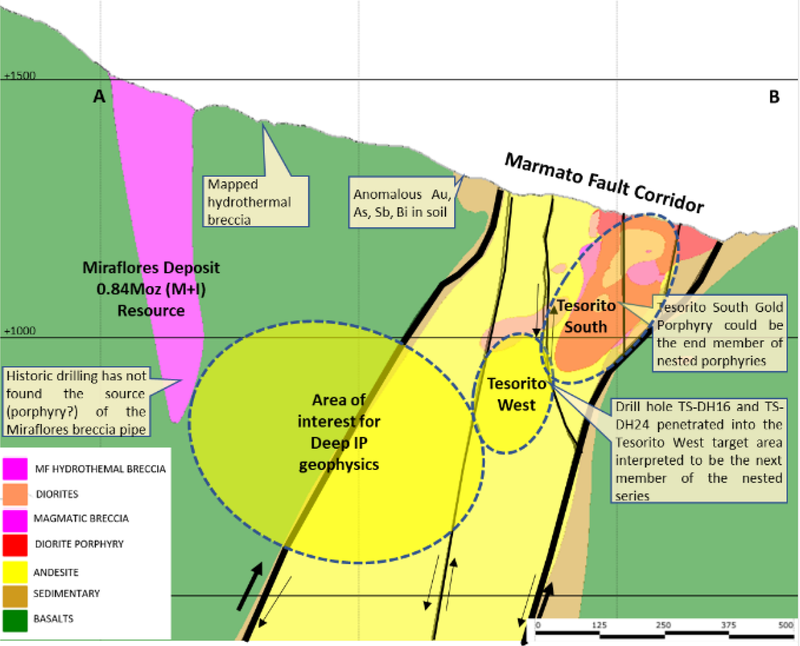 LCL has drilled through Tesorito West twice now, so it knows that it is there. (LCL intends to find out more as part of its drilling program later this year).

What’s really interesting here is that LCL believe they have found a “nested porphyry” series, with Tesorito East and Tesorito West part of a bigger regional story. A third assumed porphyry in the series, marked as the large “Area of interest for Deep IP geophysics”, is further to the west.

Tying in with that theory is the Miraflores Resource (in pink), a breccia pipe (a cylindrical or irregular shaped mass of breccia rocks). The source of the Miraflores deposit — a porphyry that caused the breccia pipe — hasn’t been found yet and we expect that it may sit in the highlighted ‘area of interest’.

So while the known porphyry at Tesorito South continues to grow... and already looks like a multi-million ounce discovery, it might just be the bookend of a much larger system.

Recent drilling has focussed on trying to find the boundaries of the northern, eastern and southern envelopes of gold mineralisation in Tesorito South, which remains open. In the process, LCL has delivered multiple spectacular gold intercepts from surface, further expanding the high grade shallow gold zone envelope in the process.

The latest drill holes (TS-DH29 and TS-DH30) were drilled from the same pad that holes TS-DH24, 25 and 26 were drilled. Recall that these three earlier holes returned similarly spectacular hits: 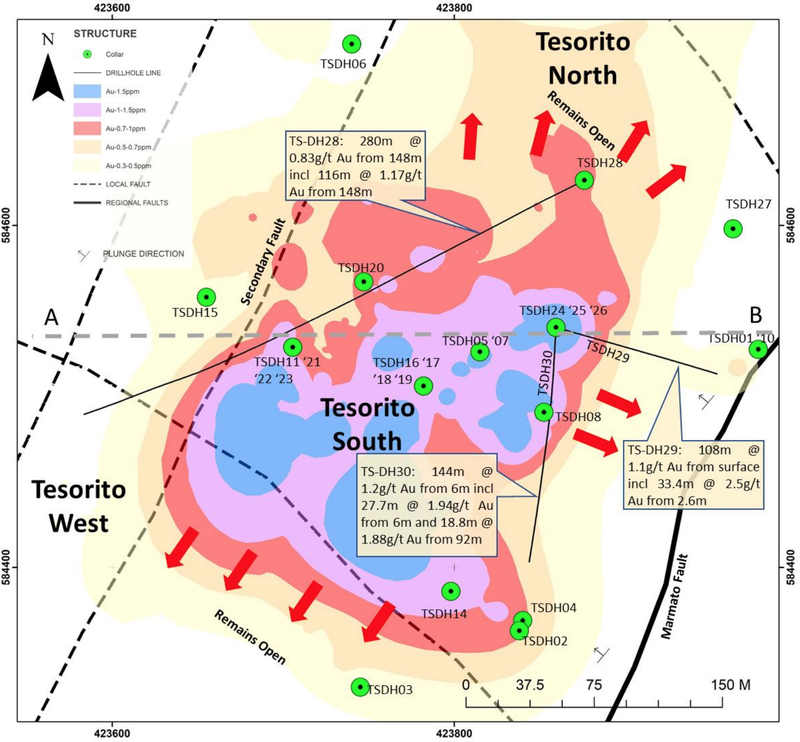 Plan view of Tesorito South showing locations of latest drill hole assay data. Tesorito South remains open to the north and to the south. Based on the results of TS-DH29 & TS-DH30, there is also scope to expand gold envelopes eastward up to the Marmato Fault

Holes TS-DH29 and 30 confirm extensions of the shallow high grade zone to the east and south. This is significant as it bodes well for the presence of a shallow, high-grade (say 2-3 g/t gold) deposit above the deeper porphyry system, improving mining economics for early production.

TS-DH28 is interesting in that it intercepted significantly wider gold mineralisation (280 metres), but is not from surface like holes 29 and 30, beginning at 148 metres depth instead. The implication is that this could be near a causative porphyry – potentially the Tesorito West porphyry target — with further drilling required to test this hypothesis. 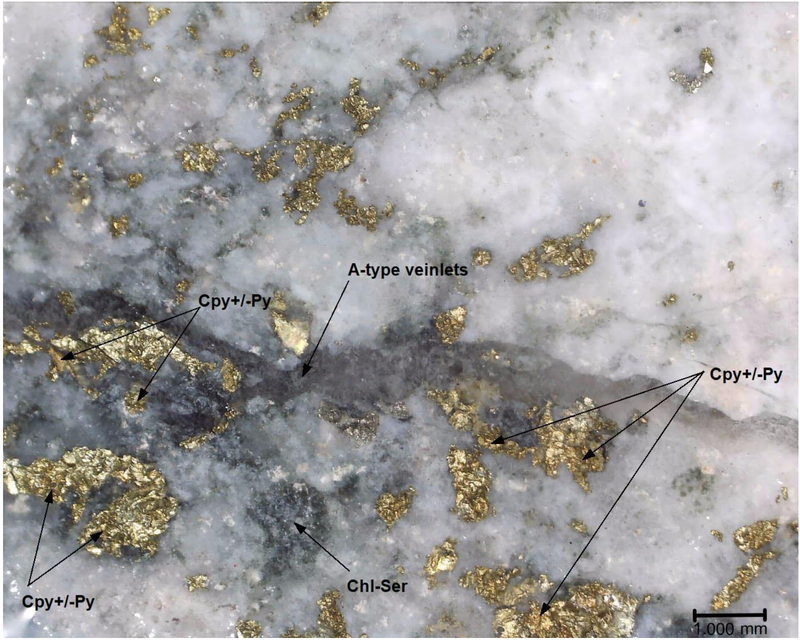 TS-DH28: a zone of elevated sulphides and hairline A-type veinlets at 241.5m (downhole) delivered 9g/t gold over a 1m interval

What’s next for LCL?

A drone-based regional magnetic survey and deep IP (Induced Polarisation) geophysical programs over the Tesorito-Miraflores area has been completed.

These results will help LCL define step out drilling targets at Tesorito and test the “nested porphyry” thesis that Tesorito South and Tesorito West (and others yet to be found) are part of a bigger system. Typically such a system is in the realm that the big miners play in, who will no doubt be keeping an eye on LCL’s progress. 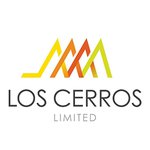