The company has agreed to acquire 100% of a promising zinc and lead exploration project in the African nation of Gabon.

Gabon is a politically stable democratic state with few instances of social instability in recent years and the government is encouraging of foreign mining activity. It has introduced specific mining investment codes which encourage investment through customs and tax incentives.

Its government is focusing on upgrading all major roads and the launch of a massive port modernisation plan that will cater for 90% of commercial traffic.

As one of the most prosperous countries in Sub-Saharan Africa, Gabon enjoys the highest Human Development Indicator (HDI) and the third highest GDP per capita in the region.

Gabon holds significant mining potential. It is a mining friendly jurisdiction, with a mature oil industry that hosts abundant energy and mineral resources with indications of mineralisation everywhere that holds the potential for real scale. However, in a win for junior explorers — including today’s company — it remains largely untested.

Before we go too far, it should be noted that this is a very high-risk, speculative stock and investors should seek professional financial advice if considering this stock for their portfolio.

There is the very real potential for Tier 1 ore bodies and the company is conducting ground based geological testing in preparation for a drilling programme that’s due to begin during the second quarter of the year.

Yet this zinc and lead project is not the extent of this company’s metals arsenal. The company is exploring other frontier locations with the aim of unlocking hidden value in largely under-explored regions.

It has a diversified portfolio of exploration projects in Africa and Australia’s Northern Territory and Queensland, providing the company with exposure to various in-demand commodities including, copper, lithium and cobalt in addition to zinc and lead.

Yet, it is the Gabon project which could be the most promising as the company moves into the market at what looks to be just the right time.

Having recently acquired the Kroussou Zinc-Lead Project in Gabon, Trek Metals (ASX:TKM) is well underway in its preparation to begin drilling in coming months.

TKM has entered into an agreement to acquire a 100% interest in the highly prospective Kroussou Zinc-Lead Project from Battery Minerals Limited (ASX:BAT) via the purchase of it’s subsidiary, Select Exploration Limited. TKM will pay BAT US$400,000 in a mix of cash and securities. It will also pay a consideration of shares and options of US$2.5 million once a Mineral Resource of 250,000 tonnes of combined zinc and lead metal is estimated at the project, as well as a smelter royalty on sales revenue.

Further details of the agreement are outlined in the company’s announcement.

Exploration from the 1960s to 1980s discovered significant zinc and lead at the Kroussou Project area and identified much near-surface base metal mineralisation.

While the project has known mineralisation, with an approximate strike length of 85 kilometres of prospective rocks, it has historically seen very little exploartion activity.

In fact, only two areas have been drilled, to a very limited extent on the entire project. These are the Dikaki and the Niambokamba areas — as seen on the map below. 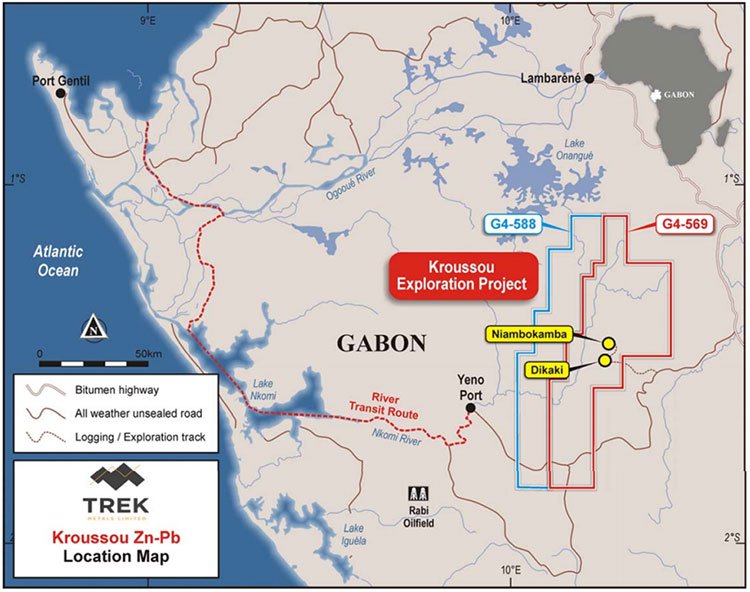 Exploration to begin at Dikaki

To begin exploration, TKM selected its initial priority area, Dikaki, based on rock chips, major flexure, historical results and accessibility to the site. The Dikaki Channel has most work and it has the best access too.

About 400 very shallow holes (average depth of 16 metres) have been drilled historically at the project — at Dikaki and Niambokamba. Of all holes drilled, approximately 60% were mineralised with many terminating in mineralisation.

Previous work was focused on exploring for lead deposits within 15 metres of surface.

Drilling completed by the French Geological Survey (BRGM) at Dikaki returned many significant intercepts including: 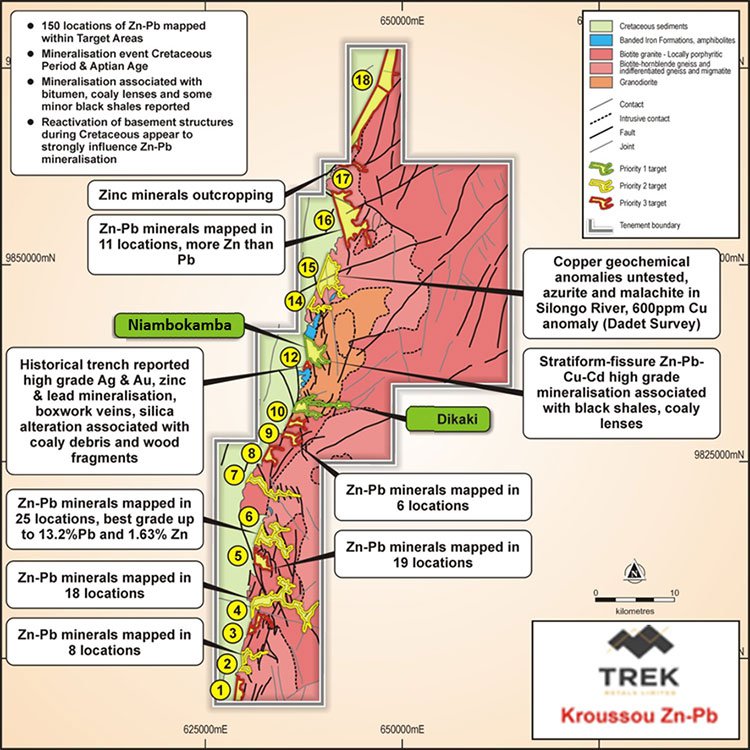 Prior to TKM acquiring the project, BAT had reported zinc and lead rich rocks including fresh sulphides at surface. These results from rock chip samples from Dikaki Prospect include:

Examples of these can be seen below. 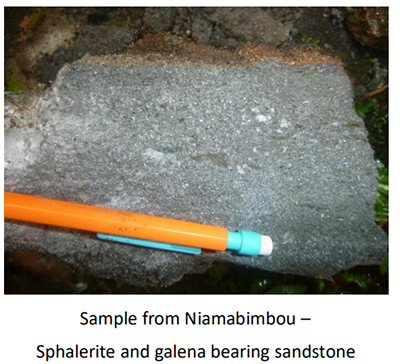 The Gabon project acquisition is timely as the zinc price is experiencing a revival. As you can see in the chart below over the past two years the zinc price has risen 123% from around US$1613/t to US$3589/t today — its highest price in more than ten years. 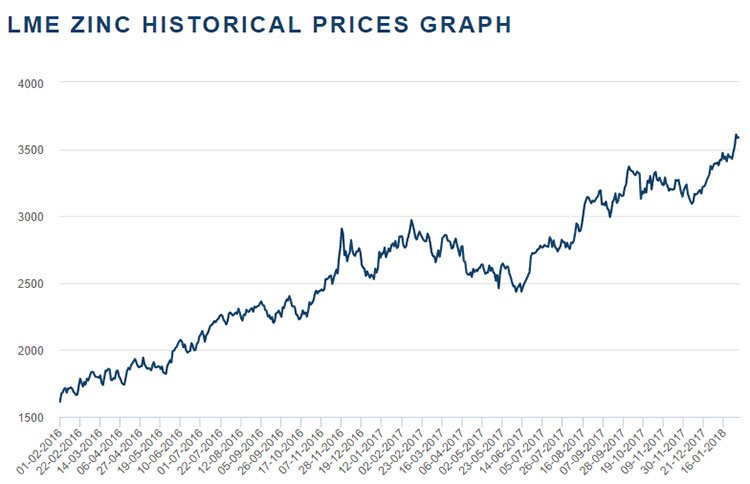 While the performance is impressive, plenty of upside could still remain for zinc prices.

Of course commodity prices do fluctuate and caution should be applied to any investment decision here and not be based on spot prices alone. Seek professional financial advice before choosing to invest.

As reported in the article below, mining consultancy group, Wood Mackenzie, say the combination of scheduled mine closures, top producer Glencore's strategic production cuts, and the impact of environmental inspections in China has depleted global stocks of zinc concentrate.

During 2017, global zinc stockpiles fell by a third to 1.8 million tonnes, that’s equivalent to 47 days of global usage. By the end of the second quarter of this year, there will be less than 40 days’ of stock available for consumers, which is a critically low level that should propel prices to $4,000 a tonne by the following quarter. 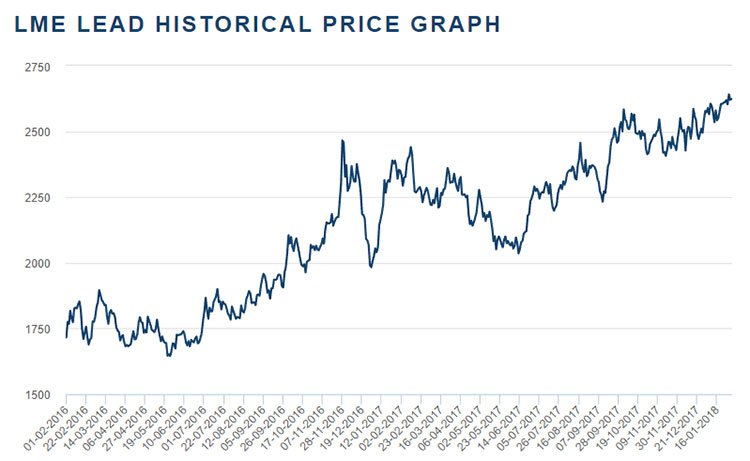 Supply shortages combined with strong demand are behind the rising price. Going forward, analysts are anticipating another strong year for lead in 2018. This expectation is based on a number of factors that combine to make now an ideal time to be invested in up and coming lead producers.

Wood Mackenzie expect refined lead production to fall short of consumption this year, and don’t see the market move back into surplus until 2020.

In addition to the supportive commodity price environment, another factor supporting the Kroussou Project is its location.

The country of Gabon is located in an untested area of Africa, which has multiple indications of mineralisation throughout, providing the potential for real scale. It hosts highly prospective yet underexplored geology that boasts excellent historical datasets.

Along with the geographical location, the country’s government is another reason for investors in mining companies that operate in the country to be optimistic.

While its economy — and mining industry — is still developing, its mineral resources have already helped make Gabon one of the most prosperous countries in Sub‐Saharan Africa. Building on this, Gabon’s government has a vision of transforming the country into a metallurgy centre, with a dynamic fabric of small to medium sized enterprises exporting metal‐based products to the whole sub‐region and beyond.

To do this it is looking to upgrade all major roads and launch a significant port modernisation plan that will cater for 90% of commercial traffic.

The company currently has a large tenement holding via applications in the Northern Territory and Queensland, much of this ground subject to Native Title negotiations prior to grant.

These tenements exhibit the same geology that hosts the World Class Century Zinc Mine - (>150Mt and 10% zinc + lead). 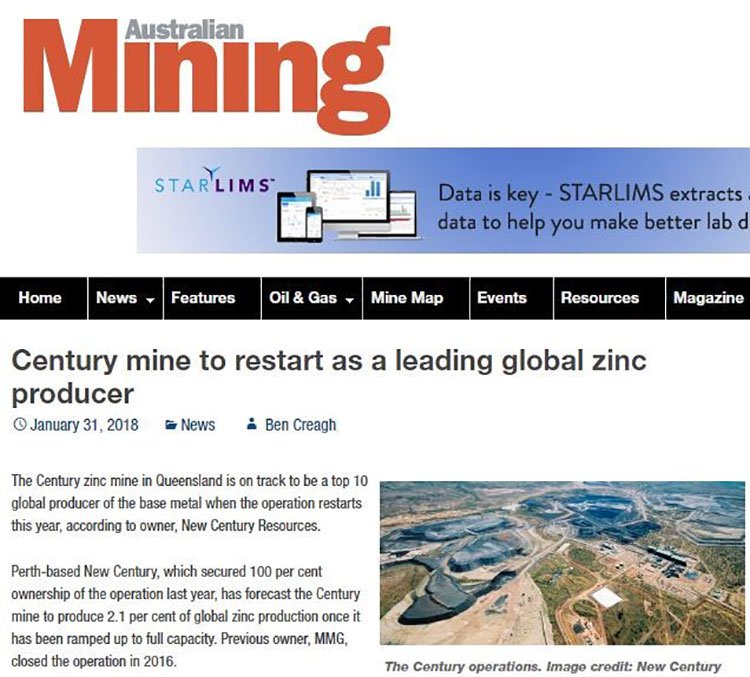 TKM would be hoping for similar traction in the future.

Project geology can also be correlated with the rocks that host the HYC Deposit (>200Mt at 13% zinc + lead) and importantly mineral occurrences have been on the Queensland side and not on the Northern Territory side, which lacks extensive exploration.

The tenements are located along strike from the emerging Walford Creek copper-cobalt prospect.

TKM recently acquired Elm Resources Pty Ltd which owned seven applications in the Northern Territory that are highly prospective for lithium and cobalt (six of these have now been granted). The project includes historical rock chips up to 1500ppm lithium superoxide (LiO2), 0.12% cobalt.

It is early stages here though and TKM has a lot of work to do so investors should seek professional financial advice if considering this stock for their portfolio.

The company’s commodity mix provides opportunities in both base load energy storage (lead and zinc) and mobile energy storage (lithium and cobalt) as the renewables sector expands globally.

The acquisition of the Kroussou Zinc-Lead Project armed TKM with an opportunity to grow substantially. It has a very real opportunity to discover a significant zinc-lead orebody in the mining friendly and geologically promising Gabon.

With around $2,800,000 cash in the bank and no debt, the company is in an excellent financial position to progress its exploration.

And it is backed by rising prices of both zinc and lead as the supply-demand equation is anticipated to continue to support the rising prices along with aspiring producers, such as TKM. 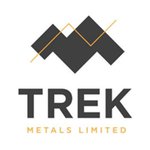