Over the last few months, White Rock Minerals (ASX:WRM) has been hard at work preparing to kick off its comprehensive exploration program at its high-potential Red Mountain zinc project in Alaska.

Spring is in full swing in the northern hemisphere, and for this savvy explorer, that means it’s drilling time.

Having acquired the under-explored high-grade zinc project around two years ago, WRM has been putting together plans for a comprehensive and aggressive exploration program to prove up existing deposits as well discover new ones.

What WRM is on the hunt for is Red Mountain’s zinc-dominant volcanogenic massive sulphide (VMS) mineralisation... Red Mountain is a high-quality, advanced polymetallic project, located in a region known for its globally significant VMS projects. For WRM, this means there’s plenty of potential beyond its two known zinc-silver-lead-gold prospects, Dry Creek and West Tundra Flats.

WRM is keen to get the drill bit spinning and the regional exploration personnel on the ground as soon as possible.

Just a few days ago, it ticked the latter off the list, announcing that personnel had now commenced arriving at the project site with the first flight from Fairbanks. With the first crew on the ground now, the company can kick off the on-site preparation for field operations which are due to start within weeks.

And last month, the company announced it had completed the mobilisation of all the major items necessary for the program including the diamond drill rig, camp accommodation and various supporting infrastructure.

In the coming days and weeks more crews will arrive, including drillers and a field geological crew — all in preparation for the significant drilling, geological reconnaissance, geochemical sampling and on-ground geophysics programs planned for the Red Mountain project.

Let’s not forget that the high-grade component of WRM’s maiden JORC Resource is 9.1Mt at 12.9% zinc equivalent... This a major project we are talking about, so it’s likely that when things get going over the next fortnight or so, they will really get going.

Although the outcomes of the drilling are speculative at this stage, so investors should seek professional financial advice if considering this stock for their portfolio.

The targeted diamond drill program (aimed at an in-fill and expansion of the high-grade Maiden Resource) will be complemented by an on-ground geophysics orientation first step across one of the two known deposits to calibrate and identify the best method, and surface geochemistry studies will also be occurring... all to be followed by a subsequent round of diamond drilling to suss out the best targets identified from that geophysics and geochem work program.

There are contracts in place for both camp facilities, helicopter support, as well as for the drilling operators... as we said, personnel are on the ground right now undertaking the final preparations.

Since we last wrote on WRM in March, it has raised a total of $3.6 million via an over-subscribed Placement and a Rights Issue, in an obvious show of support – all towards exploration at Red Mountain.

Being able to raise that kind of equity in that timeframe suggests that the market is keen for WRM to get stuck into its Alaskan tenements. And there's plenty of upside as it follows up on previous exploration work that ceased in the 1990s, now using modern exploration techniques that have advanced a long way since then.

WRM looks to have a distinct advantage over past explorers in the region, and that could be good enough reason for the market to take note.

White Rock Minerals (ASX:WRM) has put a whole lot of planning into the start of its exploration program.

The planning is detailed in the following podcast:

Since that podcast just a month ago, the first group of personnel has reached the Red Mountain site and are busy preparing for the field season – and for the drilling which is expected to be underway by the end of May.

This news followed the completion of the mobilisation of all the major items necessary for the program including the diamond drill rig, camp accommodation and various supporting infrastructure.

There’s nothing like building the anticipation, and it seems WRM is no stranger to this tactic. It’s hard to blame them when you consider that this exploration program could catapult the Red Mountain project and add to WRM's globally significant maiden zinc JORC Resource. It also has the potential to discover new deposits and ultimately pave the way to potentially develop a new mine at the site.

The project is just 100 kilometres from Fairbanks, close to infrastructure, within a mining-friendly jurisdiction, and is in an area that is highly prospective yet under-explored. In addition, the targeted mineralisation is open at depth and in some areas along strike.

Last month, WRM revealed in an announcement that it had successfully raised A$2 million via its 1 for 3 pro-rata non-renounceable Entitlement Offer.

This was hot on the heels of the company announcing its A$1.6 million equity raise through a Placement announced to the market in March... for a total of A$3.6 million raised by WRM since March.

The combined proceeds are all earmarked for the expansive exploration program about to start at the Red Mountain.

Tellingly, the combined equity raisings in quick succession amounted to ~30% of this metals explorer’s market cap...

The take up by shareholders may be reflecting expectations of a major uptick in news flow for Red Mountain once exploration kicks off... and, consequently, the potential for some serious share price movement.

Since gaining control of the project, WRM has confirmed a maiden Mineral Resource that placed the Red Mountain Project in the top quartile of undeveloped high-grade VMS (zinc, silver, gold) deposits globally.

The two deposits identified already position the project as one of the highest-grade zinc deposits of any zinc company peer listed on the ASX.

The company also plans to explore the full potential of this zinc VMS field at a more regional scale, including its prospectivity for other metals, in particular, gold.

With all of this, keep in mind that there has been no modern exploration undertaken at the project...

What exactly does WRM have planned?

The exploration program is set to kick off imminently, with the aim to infill and extend the Maiden Resource which already has two identified deposits (Dry Creek and West Tundra Flats) and a Resource base of 16.7Mt at 8.9% ZnEq1 including a high-grade component of 9.1Mt at 12.9% zinc equivalent.

The last drilling conducted at Red Mountain was in the 1990s, and provided these kinds of results:

This will involve a combination of work on the existing deposits (5-10 holes to confirm and gather knowledge and another 5-10 holes to test for extensions at Dry Creek and West Tundra Flats) and getting cracking on some new targets.

The new targets work will involve generating drill targets on the top 2-5 regional prospects that will be identified as a result of the work from the geological reconnaissance, geochem and geophysics exploration teams.

It is early stages with regard to these new targets, so investors should take a cautious approach and seek professional financial advice when considering this stock for their portfolio.

The below image indicates WRM’s plans for its West Tundra Flats prospect: 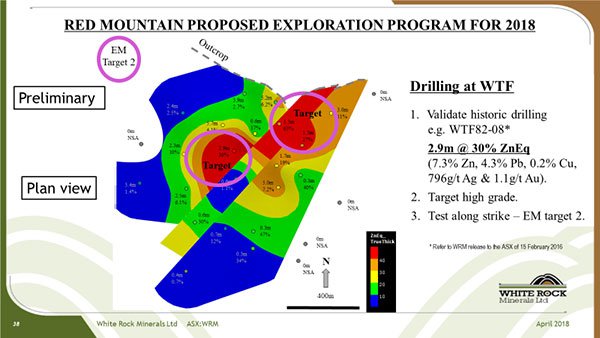 And its Dry Creek prospect... 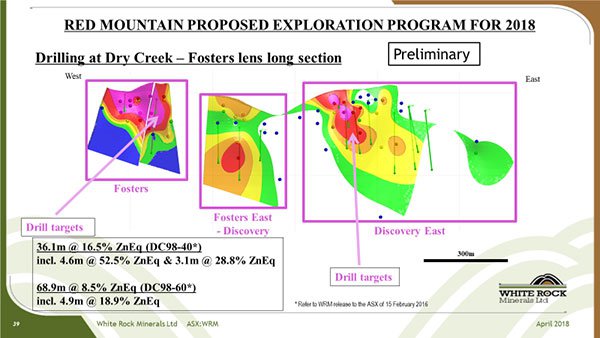 And here’s a snapshot of the new targets WRM already has its eye on: 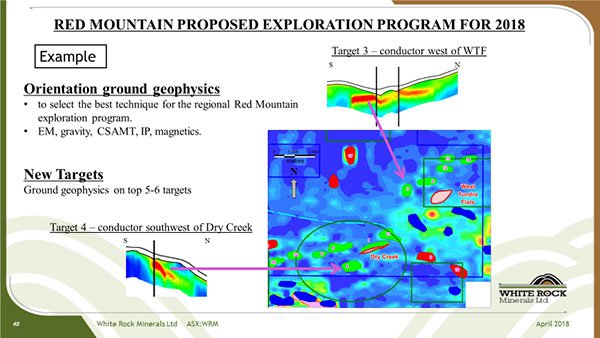 A quick look at the market

In February, stock-broking firm DJ Carmichael identified WRM’s Red Mountain Project as being ‘advanced’ and with ‘plenty of upside’ – even labelling it a ‘speculative buy’. It assigned the Red Mountain project in particular a value of $52 million, or 6 cents per share which is – suffice to say – a far cry from its current share price of $0.01. 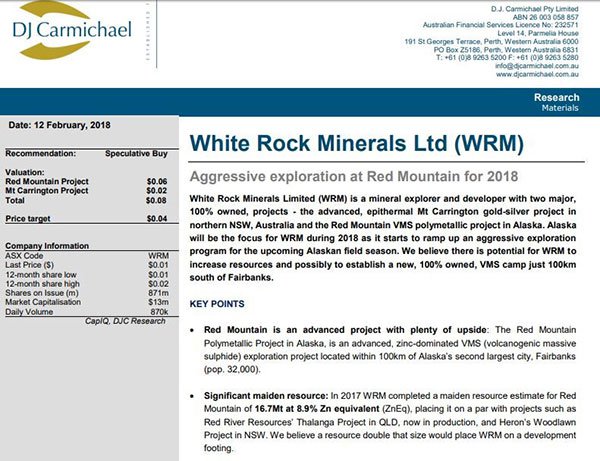 It should be noted that broker projections and price targets are only estimates and may not be met. Share trading patterns should not be used as the basis for an investment as they may or may not be replicated. Those considering this stock should seek independent financial advice.

If you add in WRM’s Mt Carrington gold and silver project in NSW, that’s another $17.3 million of value (in the broker’s estimation) for a total combined of 8cps. For the 12 months from February, the broker gave a target share price of 4 cents.

It is also noteworthy that DJ Carmichael’s valuation was independently validated by Canada’s oldest and largest independent research house — Fundamental Research Corp — who initiated coverage of WRM earlier this year on the back of its high-grade zinc VMS project, valuing that project at $42M, and WRM overall also at 8cps.

With that in mind, the below graph looks at how the company stacks up to its zinc peers: 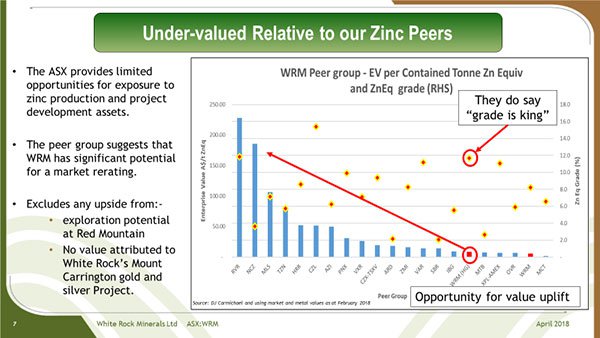 The above comparison excludes WRM’s promising Mt Carrington project in NSW, and looks only at Red Mountain – even then it strongly suggests that WRM could be in for a market re-rate.

It also doesn’t include any potential new discoveries that may be waiting just around the corner at WRM’s Alaskan project, especially when you take into account historic drill results from the project like the following: 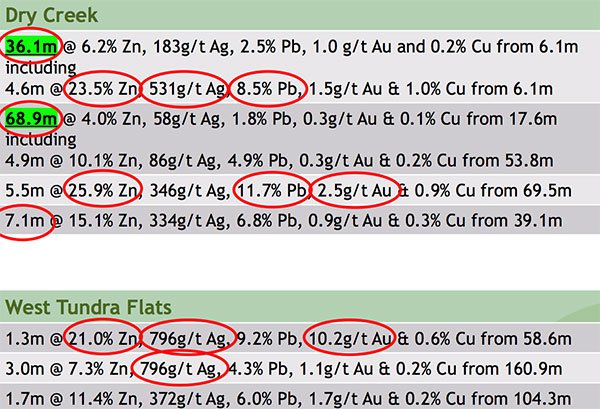 Looking at the results, there is clearly a great deal of upside as WRM looks to adopt its modern exploration techniques to take full advantage of all the previous work.

This is particularly evident when you look at the greater regional land holding they have (143km2) and the already identified 30 similar exploration targets for which they will be following up on some in this current exploration program. 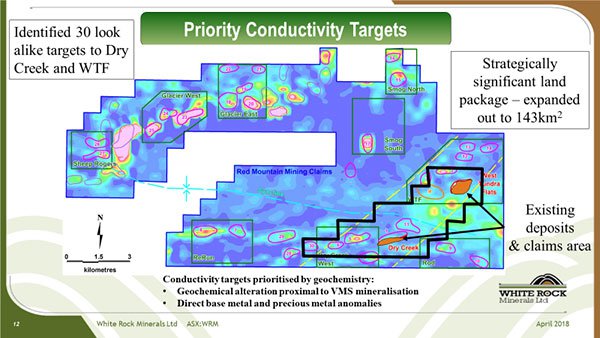 Although this is a speculative call on our part and investors should seek professional financial advice if considering this stock for their portfolio.

A quick look at Mt Carrington

While all the action is currently taking place at Red Mountain, WRM’s second 100% owned project, the Mt Carrington Gold and silver Project in NSW, is also noteworthy.

WRM has completed its gold first stage pre-feasibility study. The PFS delivered a maiden gold reserve with the first four and a half years of gold production from two pits already pre-stripped. Eight million ounces of silver classified as Indicated Resource would then follow.

Here’s a look at where Mt Carrington is and what it holds: 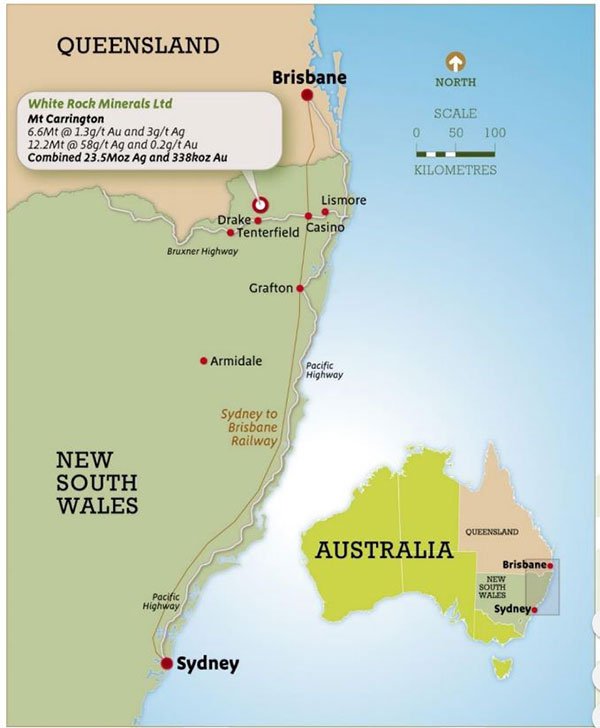 They are good numbers and we will keep you updated on the Mt Carrington side of the equation as news comes to light.

However, it is Red Mountain that is currently on a fast track.

With a highly credentialed and experienced team, cash in the bank, teams already on the ground conducting final checks and preparations, as well as Alaska’s warming temperatures... things are about to heat up in more ways than one, as WRM secures its sights on firmly escalating Red Mountain’s potential.

With all that is going on, there is a high potential for WRM to generate significant market interest once news at Red Mountain begins to flow.

Elixir Energy
ASX:EXR
Initial Investment
Jul 2019
Up as high as
362%
Read the analysis
We increased position in
May 2020 - Read more here