For the second time in six months, the $1.1 billion capped Sandfire Resources (ASX:SFR) has had an acquisition crack at MOD Resources (ASX:MOD) and this time, it looks to have stuck.

The Karl Simich led Sandfire announced a $166 million agreed scrip-and-cash takeover of copper explorer MOD in late June, following a failed bid in January that would have given the junior a much greater value than its then $55 million market cap.

MOD is now capped at around $127 million. It has been biding its time, growing its value and waiting for Sandfire to come back with a bigger offer.

It was a smart play, because it knew Sandfire wasn’t done — the mining giant has a soft spot for well-performing ASX juniors, or at least those with high expectations and great underlying assets.

White Rock Minerals (ASX:WRM) is in that category and Sandfire has shown continuing interest.

Sandfire has entered a joint venture (JV) with WRM, with the pair conducting an exploration program at the globally significant Red Mountain high-grade zinc and precious metals VMS project in central Alaska.

The billion capped Sandfire is providing the funding for the project which amounts to A$20 million over four years ($6 million in 2019) to earn a 51% interest. This can increase to 70% following the delivery of a further $10 million along with a Pre-Feasibility Study (PFS). This investment immediately puts a healthy valuation on this Alaskan asset, currently owned 100% by White Rock.

Sandfire obviously sees a great deal of upside in Red Mountain, because it has just upped the ante, committing another US$1.5 million (~A$2M) on top of the A$6 million for 2019, taking total exploration budget for this year to A$8 million.

That is the strongest endorsement of the district-scale potential of this project that you can get.

Drilling is currently underway, as WRM and Sandfire focus on testing new targets with the potential to yield a significant discovery that will support a greenfields development scenario.

The Red Mountain project looks to be going from strength to strength, so let’s catch up with all the latest news from... 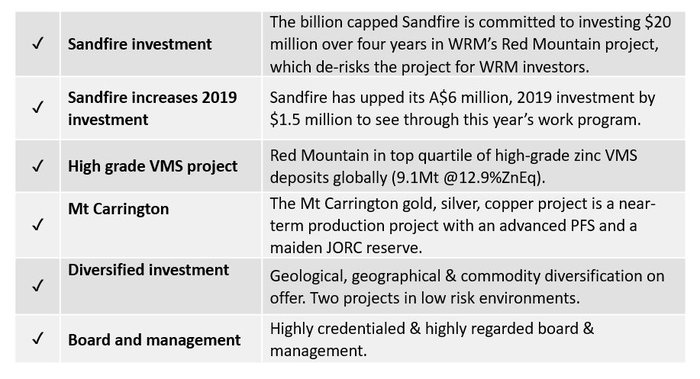 Red Mountain is certainly in a good location: it is close to major road and rail access, can be serviced by the mining hub at nearby Fairbanks and it has no community or environmental legacy issues.

It is also important to note that most of this tenement package is underexplored, which is probably one of the reasons Sandfire is in the picture and why WRM is so confident in its exploration program.

Exploration has advanced so rapidly that more than 2000 soil samples and 260 rock chip samples have been collected. A portable XRF device will provide rapid geochemical results, indicating that significant news flow could emerge in the short term.

As one of the highest grade and more significant zinc deposits held by any ASX listed company, I’d expect the emergent news to be pretty strong.

If you would like some background reading, check out our previous articles:

The first piece of the coming news flood, is based on Sandfire’s growing commitment.

Sandfire has injected an additional US$1.5 million to extend the current on-ground exploration activities into September at WRM’s Red Mountain Project.

This is the first stage of a four stage exploration program that sees Sandfire taking an increasingly large stake in Red Mountain.

As you can see by the chart below, there is a great deal of work to be done, but Sandfire is all in:

The important takeaway from Sandfire’s interest is the upside for WRM and its shareholders. There is plenty of blue sky here based on historic exploration, with a low capital commitment. It is essentially free news flow for the White Rock shareholder as Sandfire use their balance sheet on White Rock’s Alaskan asset.

Sandfire’s additional investment by the group is an acknowledgement of the quality of the project, perhaps more specifically its read on what appears to be positive early stage exploration results in 2019. 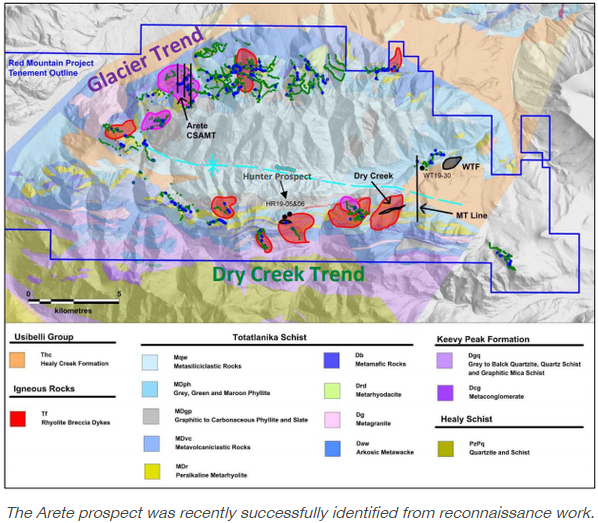 Given its interest in these results, perhaps a MOD type takeover of WRM is in the back of SFR’s mind. It is to be noted that Sandfire has form here – they moved to 70% of its joint venture partner Talisman in 2018 before taking that asset over for $70M last year. As WRM is the manager of this year’s program, it will allocate funds to extend drilling by a further five weeks to allow a number of new high priority targets to be drill tested.

Drilling is focused on testing new targets defined from the ongoing field activities that include geological reconnaissance, surface geochemistry and modelling of the recent 2019 airborne electromagnetic (EM) survey.

This should allow follow-up modelling and interpretation of airborne EM targets to assist in drill hole targeting and the continued use of down hole EM surveys.

Highlighting the significance of the additional funding, White Rock’s managing director, Matthew Gill said, “The additional US$1.5 million committed by Sandfire, over and above the A$6 million already committed for the 2019 field season, is a strong endorsement of the quality and potential of the strategic land holding we have and the targets being generated for drill testing.”

We mentioned above that recent drill results may have fast-tracked Sandfire’s interest, so let’s take a more detailed look at these results.

On 24 June, WRM reported that summer field exploration activities, which had commenced in late May, had progressed rapidly with more than 2000 soil samples and 260 rock chip samples collected and significant news flow to come.

The big news from the current exploration program comes from prospecting of the Glacier Trend, a spatially extensive alteration zone with 10 kilometres of strike.

This Trend has identified sulphide accumulations, chert and iron formations, all believed to be proximal to horizons prospective for base metal rich massive sulphides along strike and down dip.

Work is now proceeding to identify drill targets with initial ground electrical geophysics (CSAMT) to define conductivity features having commenced with three lines completed at the Arete prospect as seen in the map above.

You can read more about it in this Finfeed article. 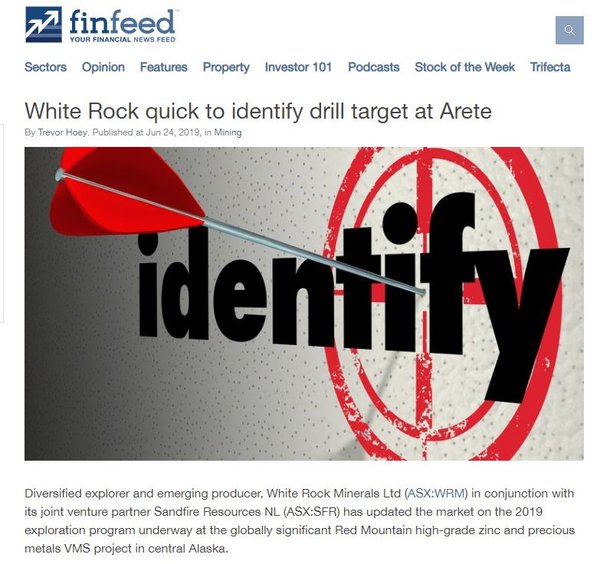 Drilling of the Arete and other targets along the Glacier Trend is due to commence shortly.

There’s a lot to like about Red Mountain. Deposits remain down dip and in some places along strike, which could lead to resource increase potential. There is also high grade zinc and silver VMS potential from identified targets surrounding known Red Mountain deposits within a large stratigraphic tenement package.

Finally, the Sandfire investment is an enormous endorsement of the quality and potential of the project.

Red Mountain alone is a reason to consider WRM in your portfolio, but there’s also a lot going on at its Mt Carrington gold-silver-copper Project in northern New South Wales.

Whilst the recent focus has been on Red Mountain, WRM’s Mt Carrington Project is ticking along nicely in the background.

This development project has an advanced PFS and a maiden JORC Reserve and offers a reduced timeline to gold and silver production. The JORC Mineral Resource is 340,000 ounces gold and 23.2 million ounces of silver, whilst the maiden JORC Ore Reserve is 159,000 ounces of gold.

The PFS shows that gold will be mined first. The maiden Ore Reserve of 159,000 ounces, a production rate of 1,000,000 tpa, gold production of 35,000 ounces and total gold produced of 148,000 oz gold over the first four and a half years all lead to these impressive sums:

As with Red Mountain, there is key infrastructure in place (valued at ̴A$20M) at Mt Carrington and a reduced CAPEX, which reduces development risk, timeframe and cost. The project will be developed in two stages: stage one will focus on the Strauss and Kylo Gold deposits and stage two will focus on the Lady Hampden and White Rock silver deposits. 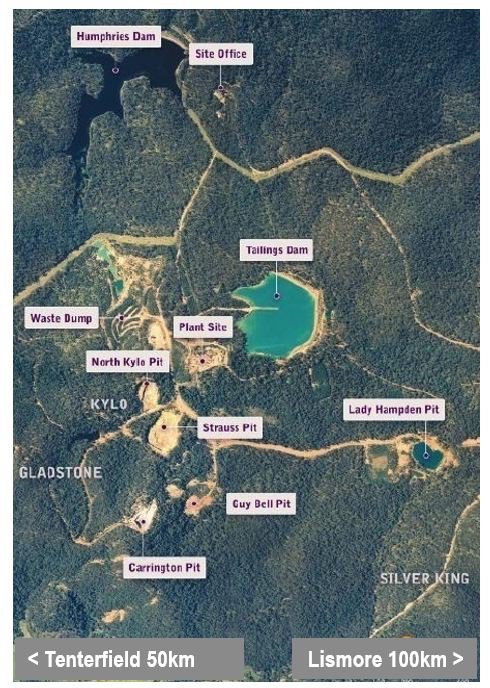 Then there is its net Present Value (NPV) which comes in at the ~A$60 range assuming the current gold price of >A$2000 per ounce:

The steady incline in the numbers above are impressive, but what stands out is this project has a one year payback and significant potential upside with silver adding another two-to-three years’ mine life. And further, the Gold First Stage only considers two of the four JORC resources to be mined, so there is the potential for more gold to follow also.

Production will occur in two stages, with stage one focusing on gold (subject to funding). Stage one goals are to complete the DFS by 2020, conduct baseline studies and submit the EIS in the same time and commence construction and commissioning in 2021.

Stage two will focus on silver — also subject to funding — and will include beginning the silver project mining plan, recovery and test work, concentrate sales discussions and completion of the flow sheet design.

Again, there will be plenty of news flow to come from this project.

Here’s a look at the Development Plan for Mt Carrington:

As you can see, all roads lead to gold production in less than three years.

In essence, Mt Carrington offers over 180km2 of highly prospective gold, silver and copper mineralised tenements. It has a larger number of targets, a broad number of mineralised zones and the overall upside looks like this: 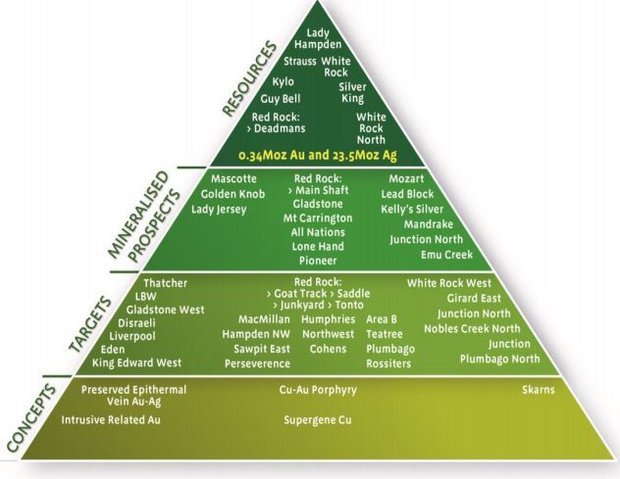 It has a near development gold asset. A billion dollar partner. And a project in Red Mountain that is in the top quartile of undeveloped high-grade zinc VMS deposits globally.

In this Hot Copper interview, CEO Matt Gill offers his overarching thoughts on Red Mountain and Mt Carrington and what we can expect a few years from now.

However, WRM’s near-term success may very well happen in a shorter timeframe than even its CEO is predicting.

Gill has to be conservative, and to some degree The Next Mining Boom does as well, yet with Sandfire continuing to pour money into Red Mountain and wholeheartedly endorsing this project, a re-rate could very well be just around the corner.