Will ZMI’s Resource Upgrade Give it an Early Mover Valuation Advantage?

Prior to Zinc of Ireland (ASX:ZMI) coming on the scene at its flagship Kildare Zinc Project, no company had ever controlled the entire area. This presented a unique opportunity to capitalise on extensive data and historical work undertaken over the greater project area.

It is a well-constrained, highly prospective, exploration search area with significant and immediate upside and it seems ZMI is taking advantage of the opportunity.

The updated resource is an important milestone for ZMI, with the contained zinc and lead resource inventory increasing to more than 850,000 tonnes.

This is a significant improvement to the existing Kildare resources and reduces the exploration risk threshold.

This updated resource provides a very strong foundation for ZMI’s ongoing exploration, which is seeking to discover new zones of mineralisation, while also expanding the known mineralisation.

We will come to the actual results shortly, but they effectively reinforce Kildare’s value.

With an enterprise value of $9 million, the company is certainly punching above its weight. It has an inferred mineral resource of 9 million tonnes at 9.5% zinc and lead and multiple zones of mineralisation from near surface demonstrating 500 metres of vertical extent.

These results point to the potential for a further resource increase through planned extensional drilling, with drilling in new areas to test for repetitions of the mineralisations.

The results also come at a time when the recognised long term zinc price sits at US$2,500.

So let’s just think about these numbers. The resource inventory has increased to more than 850,000 tonnes. The inferred mineral resource is 9 million tonnes at 9.5% zinc and lead. This is even more significant because the resource from 2017 was 5.2Mt @ 8.6% combined. So gross tonnes, grade and contained Zn+Pb have all increased and the contained tonnes have almost doubled.

Furthermore, the long term zinc price is US$2,500. Add that up and we are looking at over AU$3 billion in value.

Now, we are not suggesting ZMI is currently anywhere near that, but those numbers are certainly food for thought.

It is worth noting that the company has approximately $3 million in cash which will fund an ongoing and extensive drilling campaign that could well see the company in a position to make strong inroads into establishing a pre-development footprint in the second half of 2019 – so there is plenty of news to come that could boost its $12 million market cap.

With that in mind and plenty more to discuss, let’s catch up with...

Here’s why I like ZMI as an investment case: 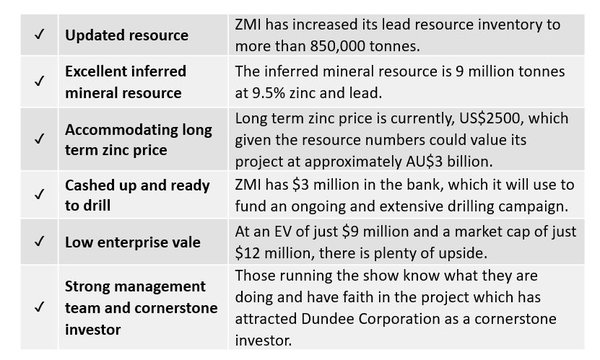 Ireland presents the best place for Zinc of Ireland (ASX:ZMI) to taste success. The country has a rich history of zinc mining as demonstrated by the profitable Lisheen and Galmoy mines, which were also located within the Rathdowney Trend within 80 kilometres of Kildare.

The Kildare Zinc Project is located just 40 kilometres south-west of the capital of Dublin and comprises six contiguous licenses spanning 250km2 in the heart of the Rathdowney Trend.

Multiple high-grade bodies of Irish-type zinc and lead mineralisation are akin to Lisheen and Galmoy, which is upside in itself.

Here’s a look at the lay of the land, tonnage and grades of nearby deposits.

So when you compare ZMI’s updated resource of 9 million tonnes at 9.5% zinc, with the lead resource inventory increasing to more than 850,000 tonnes, you get a sense of how important today’s news is.

Just looking at the table above, you can see how close the tonnage is to Galmoy, so there’s a lot to like here.

As ZMI executive director Patrick Corr said on releasing today’s announcement, “This updated resource ticks another important box for our 100% owned Kildare Zinc Project, with our contained zinc and lead resource inventory increasing to in excess of 850,000 tonnes.

“This significant improvement to the resources at Kildare greatly reduces the exploration risk threshold and provides a very strong foundation for our ongoing exploration, which is seeking to discover new zones of mineralisation and to expand the known mineralisation.

As it happens, with a substantial resource inventory, significant exploration upside, excellent metallurgical performance, and additional de-risking activities ongoing, the Kildare Project remains well-poised on the pathway to development.

The Inferred Mineral Resource for the McGregor and Shamrock Zones of the Kildare Zinc Project using the preferred zinc equivalent cut-off grade of 5.5% is summarised in the following table.

Prior to completing the updated resource estimate, ZMI technical management and its specialist consultants undertook a multi-phase data acquisition programme in order to materially increase the level of knowledge and understanding of the Allenwood Graben, a highly prospective area of approximately eight square kilometres located within the greater Kildare Project.

Metallurgy has been important in terms of establishing a zinc equivalent cut-off grade for use in resource reporting.

The metallurgical test work was carried out at a course grind size using a standard differential flotation process and a standard reagent regime.

This is a highly technical part of assessing the commercial viability of the ore which will be part and parcel of determining the economic credentials of the project, and in ZMI’s case the bottom line clearly delivered promising metallurgical results. 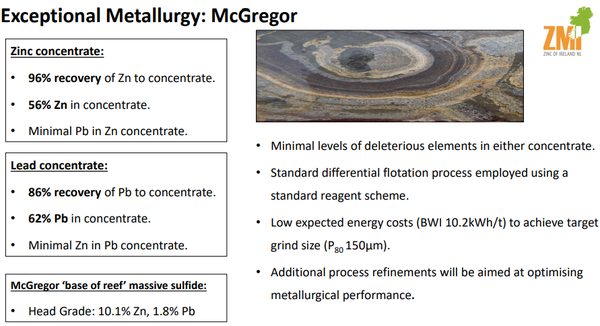 The ZMI team has gone to exhaustive lengths in all aspects of developing the project, including the retrieval of historical data, exploration outside of known mineralisation and extensive deeper drilling based on well researched targets.

ZMI’s approach to arriving at a zinc equivalent formula was just as intricate with the group applying average prevailing zinc and lead prices over the last five years.

Essentially, we are looking at a long term zinc price of $2500 per tonne, remembering that ZMI has increased its resource inventory to in excess of 850,000 tonnes, which brings us back to that $3 billion number.

The Phase 1 exploration drilling campaign sees multiple rigs targeting areas in the Allenwood Graben with the potential to host additional zones of mineralisation similar to McGregor and Shamrock.

The Phase 2 drilling campaign planning is also being advanced.

Phase 2 has a particular focus on the significant potential to expand the resource proximal to McGregor and Shamrock. 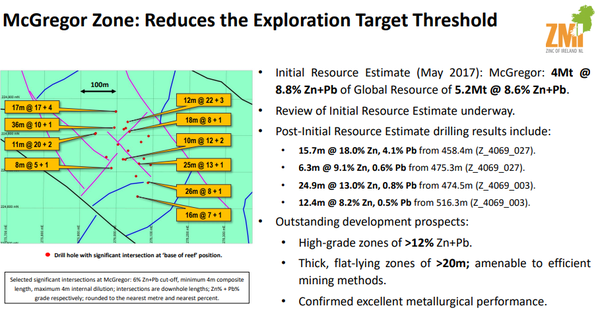 Allowances will also be made to follow up areas of priority from the Phase 1 drilling.

Environmental, ESIA and additional metallurgy work will also be undertaken with a view to further de-risking the Kildare Zinc Project.

The strength of the project was backed even before the resource upgrade.

Dundee Resources Limited, a subsidiary of Canadian-based and Toronto Stock Exchange listed Dundee Corporation (TSX:DCA), got involved in ZMI’s previous cap raise of A$2.425 million at $0.005 per share — an encouraging 25% premium to the market price.

That made Dundee a cornerstone investor with a 19.9% shareholding, which significantly strengthened ZMI’s share registry.

It certainly tightened the registry as ZMI’s top two holders, in addition to board and related parties, hold around 45% of ZMI’s shares.

Dundee Precious Metals has multiple projects spanning Canada and Eastern Europe, and is exploring in Africa. This is a company that knows what it is doing and it is heavily backing ZMI.

If that isn’t a vote of confidence, I don’t know what is.

Except it doesn’t end there.

ZMI already has a strong board and management team, but this was strengthened further by the appointment of Julian Barns to the board.

Barnes is a geologist with over 37 years’ experience in major exploration and development projects and was previously Executive Vice President of Dundee Precious Metals. He founded and led Resource Service Group which ultimately became RSG Global then sold to Coffey Mining for $16 million.

ADT has similar mineralisation, but a market cap of almost $100 million more, so again there’s plenty of upside for ZMI.

Essentially, when all is considered, ZMI has a cracking team and an excellent resource, but still holds an early mover valuation for investors to consider.

With ZMI’s Phase 1 exploration drilling campaign continuing, with multiple rigs targeting areas with the potential to host additional zones of mineralisation similar to McGregor and Shamrock, there’s still a great deal of news to come in the back half of 2019.

The company is now planning its Phase 2 drilling campaign, with a particular focus on the significant potential to expand the Resource proximal to McGregor and Shamrock.

ZMI will look to further de-risk the Kildare Zinc Project, such that any formal economic and development studies to be undertaken in the future can be expedited.

It has a lot of work ahead, but it should be buoyed by the numbers.

It has cash in the bank. A low market cap. Its resource numbers are excellent compared to much higher caped peers and the EV offers an enormous amount of blue sky.

ZMI is now one to watch.