New Look SEI on the Verge of Tungsten Production

The last 12 months has been an extremely rewarding period for shareholders in Speciality Metals International Ltd (ASX:SEI), a company that is about to bring its Mt Carbine Tungsten Mine in North Queensland back into production..

You often hear company executives say that their focus is on getting things right on the operational front, and after that the share price will take care of itself.

Speciality Metals is certainly a case in point with its shares up some 400% year-on-year as the company met several milestones in preparing its tungsten operations for production in 2020.

The momentum began in December last year when the company announced that it was in advanced negotiations with Cronimet Holding GmbH for a conditional participation in the staged development of its Mt Carbine Tungsten Project and to enable the purchase of the Mt Carbine Quarry and Mining Leases, ML4867 and ML 4919 by the company through alternative financial instruments.

CRONIMET was an ideal partner as it operates a global supply chain for stainless steel, specialty steel raw materials and other strategic minerals, while it has significant expertise in the recovery of high-quality raw materials using the latest technologies and production methods.

Other milestones have included:

Certainly SEI has been busy since it completed the Mt Carbine acquisition on 2 July. Just this week, it announced that through its JV with CRONIMET Australia, it has successfully completed the commissioning of the water circuiton the new and refurbished plant at Mt Carbine.

It’s an opportune time to be in tungsten as well.

By 2025, the tungsten market is predicted to exceed US$8.5 billion and grow by more than 8% per year.

Demand for tungsten from defence, industrial, and oil and gas applications is on the rise. Speaking of growth, world demand is set to rise by 4.2% this year on the back of expansion in construction, mining and manufacture, aerospace, machinery and metal products.

So, let’s catch up with the company for a more in depth look at its achievements since the acquisition.

On 2 July, Speciality Metals (ASX:SEI) pulled the trigger on a tungsten target that could significantly change the game for the company.

The target was the Mt Carbine Quarries, a world class project with all plant and equipment at hand and mining leases ML4867 and ML 4919 in the bag.

The following map illustrates the location and size of the asset: 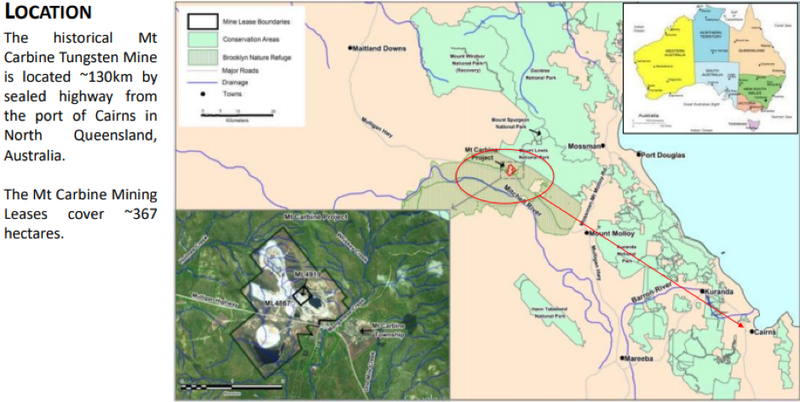 The acquisition, brought with it one of the most powerful relationships of any ASX explorer...

At that stage the company was also in advanced discussions with CRONIMET and institutional investors on share placement opportunities.

It was proposed that the proceeds from this share placement, together with the aforementioned cash advance (circa $5 million), would be used to complete the purchase of the Mt Carbine Quarry and Mining Leases, ML 4867 and ML 4919.

This effectively opened the door for shareholders who could now see the light at the end of the tunnel.

It is important to note that the business of Mt Carbine Quarry is to crush rock from the mine waste stockpile and make different grades of road metal and construction material. 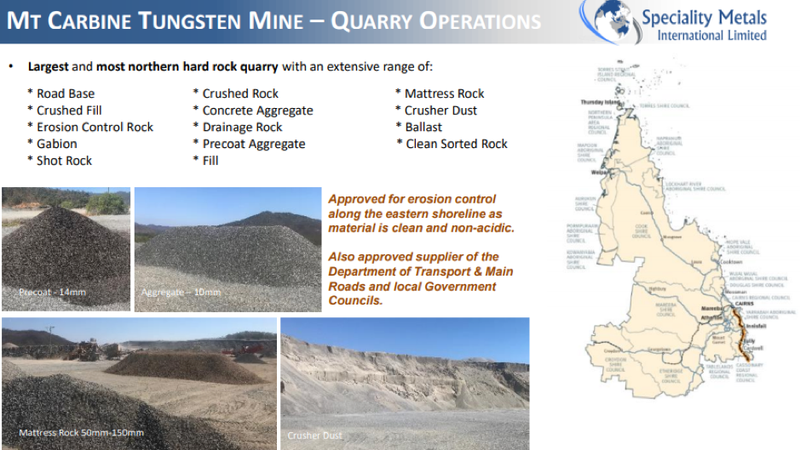 The quarry provides the company with an invaluable source of cash flow from the existing quarry business and the associated quarry infrastructure also offers significant benefits in the development of mining operations.

Of course, ownership of the Mining Leases is also integral to the successful development of the Mt Carbine Tungsten Project, particularly in terms of growing the resource, increasing scale and extending the mine life of the operation.

By June, the purchase had become unconditional, paving the way for Speciality Metals to unlock the long recognised value of the Mount Carbine Tungsten Project.

At this point the joint venture with CRONIMET had been ratified and management was already crunching the numbers, estimating that the group could commence tungsten concentrate production at the lower end of the production cost curve.

The joint venture will initially recommence production from the tailings and stockpile retreatment projects which are pictured below, along with the resource summary.

With the ground work completed, Speciality Metals is now on track to bring the Retreatment Plant back into production by the December quarter of 2019.

The Mt Carbine Quarry is a fully permitted, established business that has been in operation for over 20 years within the Mt Carbine Mining Leases which offers substantial growth opportunities and an invaluable revenue stream.

Consequently, the attention now turns to realising the synergies between the quarry and the company’s future mining activities through effective waste management which the company believes will be a lucrative exercise.

Waste rock from all stages will be utilised as quarry feedstock and x-ray ore sorters will be used to remove tungsten rich quartz from the stockpiled material.

The company estimates that beneficiation of the ore will deliver 1 tonne of tungsten ore for every 40 tonnes of waste, and trials will be conducted in 2020 to confirm these expectations.

Historically, Mount Carbine was one of the world’s largest tungsten mines, delivering 40% of Australia’s annual tungsten production until low metal prices forced the closure of operations after the 1987 stock market financial crisis.

Given the sizeable production that can be achieved at Mt Carbine, Speciality Metals will benefit from scale and the introduction of efficient practices.

With regard to the mine’s production capabilities it should be noted that it is the largest and most northern hard rock quarry in Queensland.

All feed stock in the order of 18 million tonnes is sourced from stockpiled mined rock with approximately 6 million tonnes available from a stockpile that has already been processed through an optical ore sorter.

Approximately 12 million tonnes of stockpiled mined rock will be available for future quarry feed after processing by the Joint Venture.

This makes the quarry an extremely cost-competitive operation as no drill and blast is necessary as all mined waste rock becomes quarry feed stock with only secondary crushing, screening and blending required to form a saleable product.

The next 12 months will see the commencement of stockpile ore sorter trials, the re-establishment of open pit mining and the development of an exploration program with the latter also including applications for additional mining leases surrounding the group’s existing tenements.

From a geological perspective, these prospects are dominated by scheelite mineralisation.

Historical mapping and sampling indicate both prospects have extensive strike lengths with Iron Duke being mineralised over a strike length of one kilometre.

Scheelite mineralisation has also been traced for 2.2 kilometres along a strike at Petersens Lode

Management recently discussed the potential to increase the existing resource through drilling of the Iron Duke extension.

While mineralisation from Iron Duke hasn’t been included in the resource estimate, it lies within the planned open cut envelope.

Specialty Metals highlighted that the average true widths from six drill holes was 8 metres with an average weighted grade of 0.32 tungsten trioxide (WO3).

Where is the tungsten price heading

There has been a decline in the tungsten price in 2019 to around US$200/mtu (metric tonne unit), but the sharp slide from levels of around US$280/mtu could mainly be attributed to the flagged public auction of nearly 30% of annual worldwide production.

The metal has rebounded since the auction was conducted, as the winning bid represented a 4% premium to the spot price at that time.

The following graph shows supply/demand dynamics that are anticipated out to 2030, and it would appear that Speciality Metals is bringing its operations back into production at the right time. 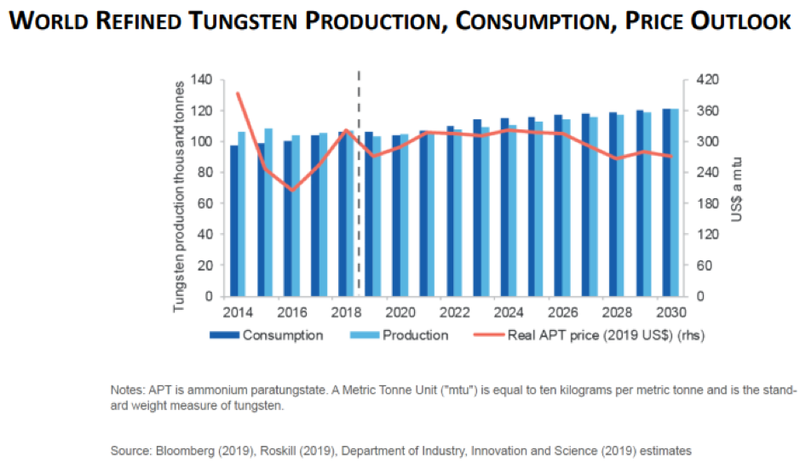 In terms of demand, it is worth noting the pronounced uptick between 2020 and 2024 with the above estimates indicating that these are sustainable consumption figures.

In September, Industry Queensland released an article that referenced a report prepared by the Office of the Chief Economist regarding the market outlook for six critical minerals identified as holding significant potential for Australia.

Indeed, tungsten is a metal with unique qualities that make it the material of choice in the production of components that require strength, durability and heat resistance as it has the highest melting point of all metals.

Consequently, it has many applications in the construction of aeronautical, automobile, heavy earthmoving and military devices and equipment.