Hot Chili is making good on its plans to unlock one of Chile’s most significant copper-gold porphyry discoveries of the past decade.

The company’s latest drilling results confirm its Cortadera Project — a major copper-gold porphyry discovery located along the Chilean coastal range — as being one of the most globally significant discoveries of 2019.

After recording multiple stand-out drill results beginning in June of this year, this result firmly announces Cortadera's arrival on the global copper stage.

Hot Chili’s addition of Cortadera less than a year ago, has transformed the company’s growth trajectory and has seen it outline what could become the world’s next Tier-1 copper-gold discovery.

That would prove to be a huge milestone, it is no exaggeration, given that these results rival drill intersections from some of the world’s most recent and significant copper-gold discoveries. These include SolGold’s Cascabel porphyry copper-gold project in Ecuador, which has a global resource of 5.2Mt of copper and 12.3Moz of gold, and the Timok copper-gold project in Serbia that’s owned by China’s Zijin Mining.

A large, vertically extensive core of high-grade copper now underpins Cortadera with expansion drilling underway and a first resource estimation due in the new year.

The company’s first expansion diamond drill hole (CRP0029D) has just been completed at a depth of 982m, having recorded mineralised porphyry over a width of approximately 662m starting from 320m down-hole depth to end of hole. Assay results from this hole are expected to be released in the coming weeks.

A further diamond drill hole is also now underway and even though much of the sector slows down at this time of year, Hot Chili still has three deep reverse circulation drill holes planned for completion prior to Christmas.

This all comes right as the copper price looks to be turning a corner.

Here’s why I think HCH is worth a look: 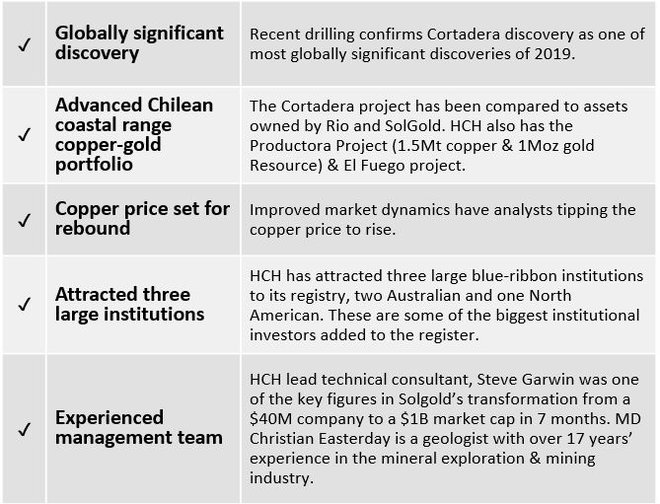 While recent attention has focused on the company’s globally significant drilling results at Cortadera, this was not Hot Chili’s first foray into copper-gold exploration in Chili — the company was already one of the ASX’s top listed copper developers in the region, with an established resource base of 1.5Mt copper and 1Moz gold at its Productora project. 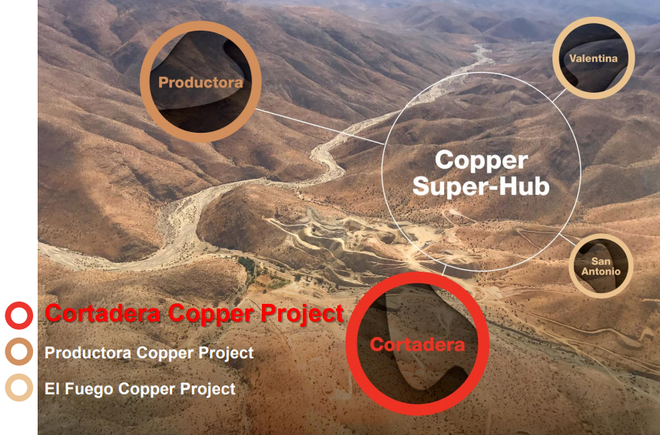 But it’s this year’s addition of the Cortadera copper porphyry project, as well as the El Fuego high grade copper project, that enables the company to achieve its expanded growth strategy, unlocking both scale and grade.

The company’s progress has been reflected in its share price which has received a substantial boost after the Cortadera Project was added to the company’s portfolio of assets. 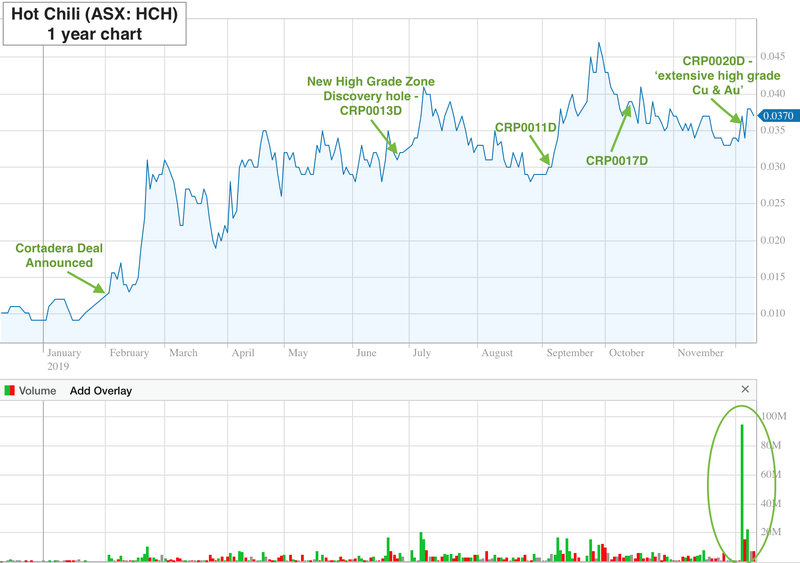 Renewed optimism around the copper price has also had some investors reconsider junior copper explorers including Hot Chili.

A large-scale improvement in investor sentiment is one factor that is expected to support copper prices, following uncertainty around the US-China trade war (China accounts for nearly half of global copper demand of an estimated 24Mt this year). Weakening mine supply, threat of disruptions, low global copper stocks and a robust demand outlook should also support copper.

The Cortadera discovery lies just 14 kilometres from the company’s large-scale Productora copper development and is adjacent to the high grade El Fuego satellite copper projects as can be seen on the map below. 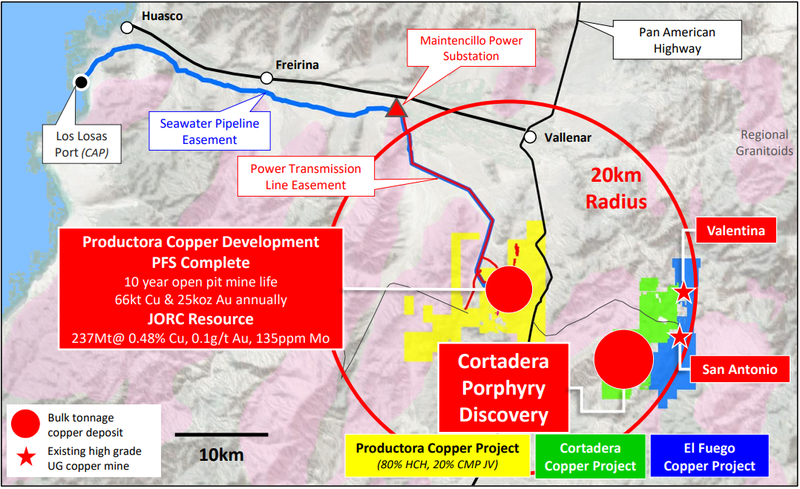 Location of Productora (yellow) and the Cortadera discovery (green) in relation to the consolidation of new growth projects and coastal range infrastructure. 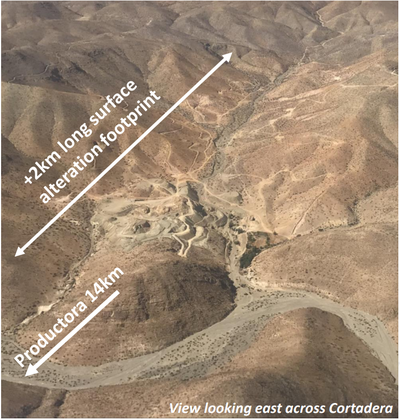 In February 2019, Hot Chili acquired an option to acquire 100% interest in the privately-held 2km long Cortadera discovery over 30 months for US$31.5 million — the first instalment of US$5 million is already satisfied.

In early April, the company commenced a confirmation drilling program comprising 17 holes at Cortadera and the first drill results arrived in June and have continued regularly since then.

These holes have all been focussed toward defining an initial high-grade core to the largest of the four porphyry centres discovered to date at Cortadera – Cuerpo 3 (main porphyry).

Many of these results were covered when we last updated you on the company’s progress in the October report, “Hot Chili in the Box Seat to Deliver a Globally Significant Copper Development with Third Record Drill Result”.

The year’s exploration to date culminated in the most recent drill result (on 4 December) out of the project, at Cuerpo 3 — the project’s main porphyry deposit — that confirmed the Cortadera copper-gold porphyry discovery as one of the most significant global discoveries of the year.

The new result from diamond drill hole CRP0020D recorded close to a one kilometre intersection from surface and confirmed extensive high grade copper and gold across the core of the largest porphyry discovered to date at Cortadera.

Results from hole CRP00220D confirmed and extended areas of surface enrichment and wide, higher-grade, copper-gold sulphide mineralisation at depth, which had not previously been closed off by 23,000m of historical diamond drilling. 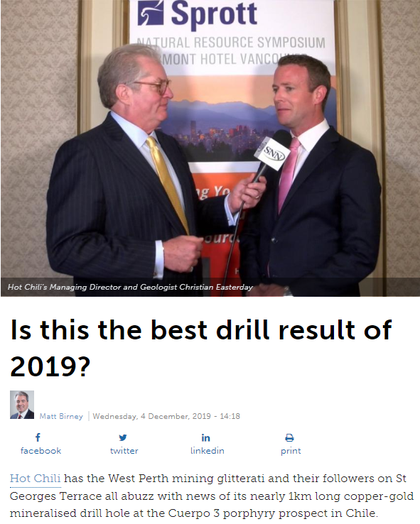 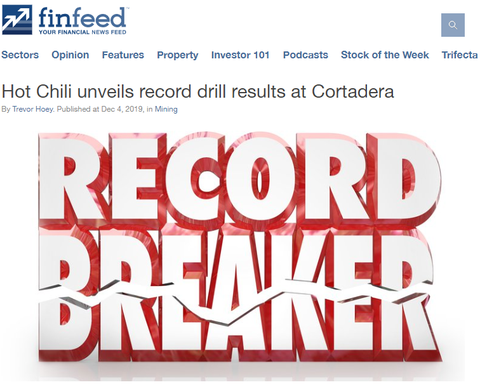 The following plan view across the Cortadera discovery area displays the latest drilling results at Cuerpo 3, along with significant historical copper-gold DD intersections across Cuerpo 1, 2 and 3 tonalitic porphyry intrusive centres: 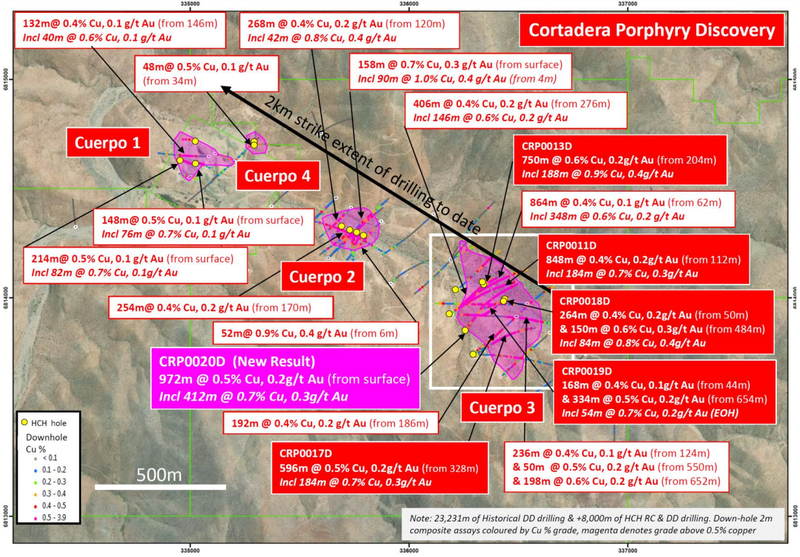 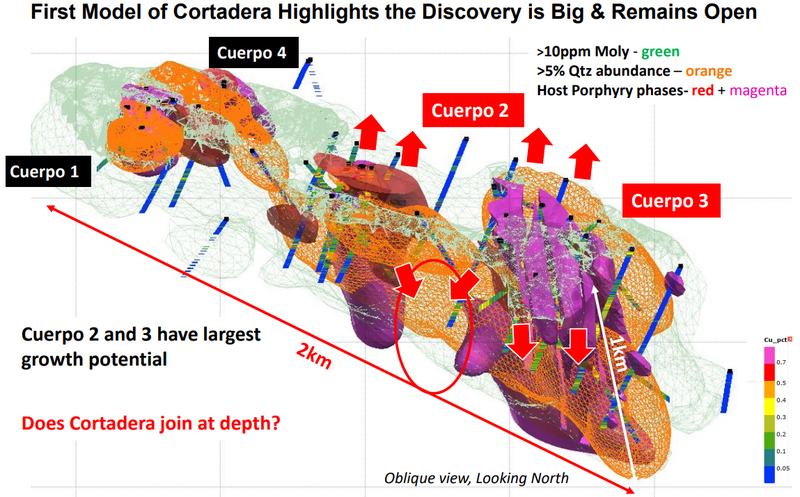 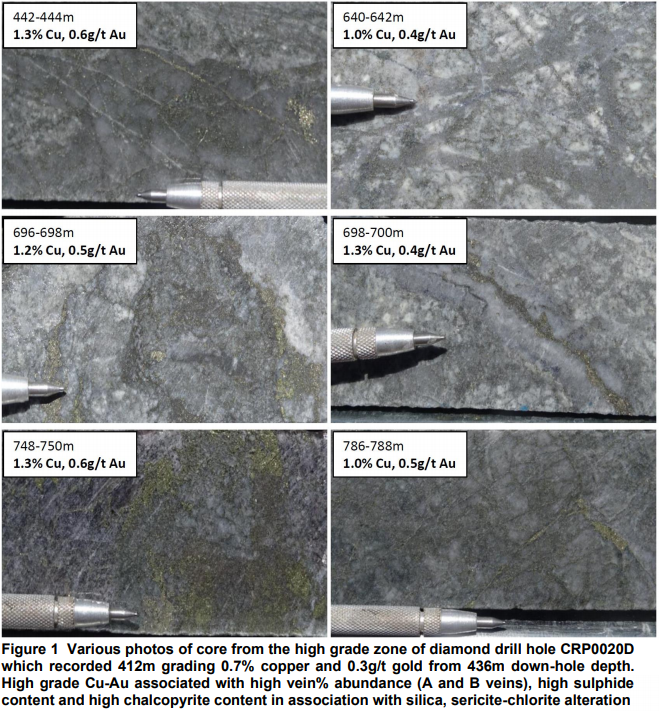 Hot Chili’s CRP0020D drill hole at Cuerpo 3 (the largest of the four porphyries discovered to date) recorded a record drilling intersection from surface in addition to the widest high grade Intersection recorded to date at Cortadera. 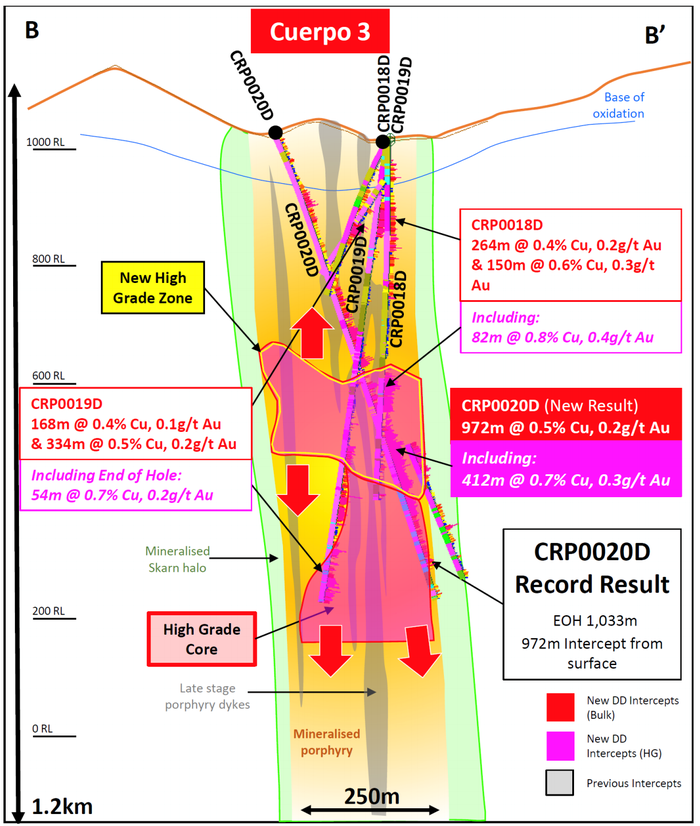 In addition to delivering the best results in the company’s history from the recently discovered high grade zone, drilling has also confirmed large up-dip extensions to Cuerpo 3. The Cuerpo 3 porphyry remains open to the north, south and at depth.

This result from Cuerpo 3 rates amongst the worlds’ stand-out copper-gold porphyry drill results ever recorded globally. 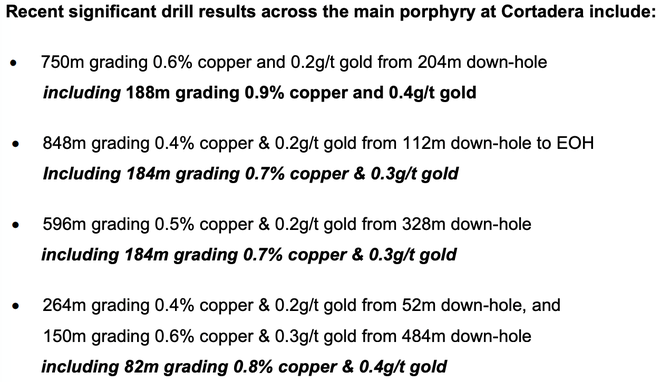 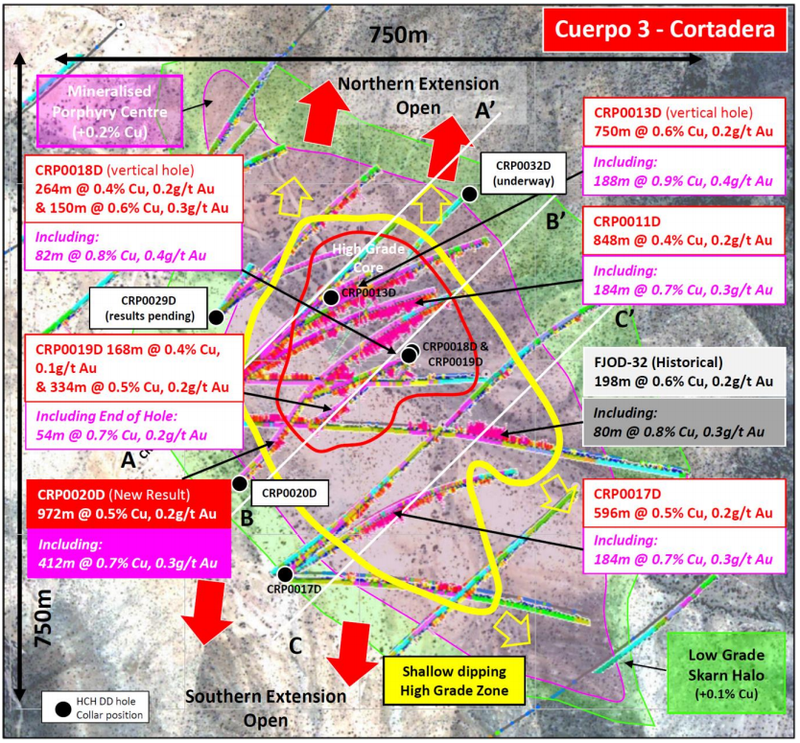 Plan view of Cuerpo 3 - the Main porphyry of the four porphyry centres discovered to date at Cortadera.

“In little over nine months we have transformed the growth trajectory for our company and outlined what could become the world’s next Tier-1 copper-gold discovery,” he added.

Here is a complete list of the best 24 copper-gold drill intercepts worldwide since January 2018 (ordered by width of drill intersection): 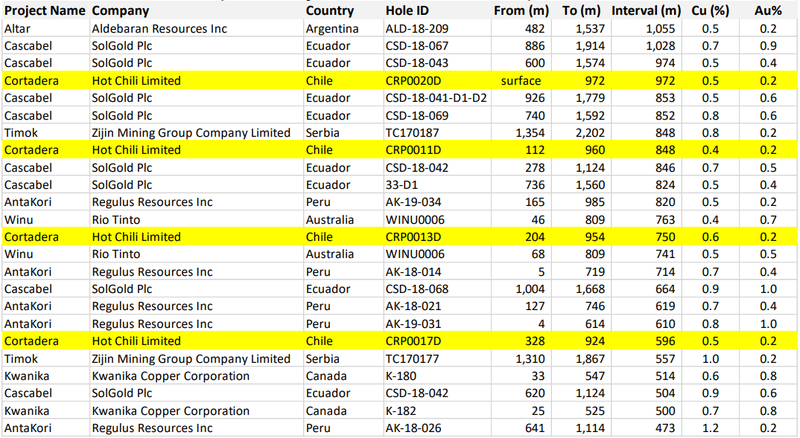 In addition to the recent headline drilling results, the company has also just completed its first expansion diamond drill hole (CRP0029D) at a depth of 982m, having recorded mineralised porphyry over a width of approximately 662m starting from 320m down-hole depth to end of hole. Assay results from this hole are expected to be released in the coming weeks.

A further diamond drill hole is also underway (CRP0032D) and three deep reverse circulation drill holes are also expected to be completed prior to Christmas. These first holes are directed towards the northern extension of Cuerpo 3.

Cortadera is shaping up as a globally significant standalone copper-gold project which can utilise the Productora project resources, and leverage from a central processing and combined infrastructure approach along the coastline of Chile.

With further exploration results on the way we can expect this year’s share price momentum to continue over into the new year, backed by the current expansion drilling and a first resource estimation due in the new year.