Peninsula Mines (ASX:PSM) has defined significant exploration targets to drill and prove up the Resource potential at its key graphite projects in South Korea.

Things have been heating up at the small cap’s 100%-owned Gapyeong project in particular. Earlier this month, PSM identified high-grade graphite channel intersections at the project, located 50 kilometres northeast of Seoul.

These results were followed up with PSM defining a significant and high-grade flake-graphite Exploration Target estimate of 13 to 17 million tonnes grading 8% to 11% TGC and containing 1.1 to 1.7 million tonnes of graphite for its Gapyeong, Yongwon and Eunha North flake graphite projects.

The Gapyeong project represents 85% of this exploration target, so it is here that PSM is preparing to drill to define the graphitic units and target a maiden Mineral Resource.

Drilling access agreements have been signed with two key private landholders at Gapyeong and, subject to council approval, this will allow initial drilling to target a core 240m strike length.

This drilling will focus on the area which provided the most intense electromagnetics (EM) anomalies at Gapyeong — the same location that the thick, high-grade channel sampling results were taken from.

As graphite is a particularly strong EM conductor, the company is treating the EM survey results as a very positive indicator.

We have established that Korea is taking the lead as far as lithium battery manufacture goes. We also know that graphite is a key component of the anode required for lithium batteries, but in order for it to be used, it needs to be processed and made into very high-purity ‘spherical graphite’.

PSM has a play in this value-add process as well. Graphite unearthed at its Gapyeong and Eunha projects will now be tested for down-stream processing potential in Germany, targeting production of 99.95% purity, uncoated, spherical-graphite to meet the specifications required for lithium-ion battery production.

The small cap is looking to prove up two things simultaneously: initial Mineral Resources at its graphite projects (with the frontrunner being the Gapyeong project), and its value-add process to turn graphite concentrate into spherical graphite with over 99.9% purity.

After all, that’s the product that offtake partners will require in order to use the graphite in batteries, and they’ll pay up to five times the price of concentrate for this product, which sells for US$3000 to US$4000 per tonne.

With both upstream and downstream strategies in mind, PSM plans to be the ideal choice in the region to provide the high-tech battery industry with this key ingredient — right on the off-takers doorstep, given that South Korea is a hot spot for lithium batteries as well as being broadly considered one of the world’s leading technology hubs.

A detailed ground magnetics program has identified new anomalies and massive-sulphide targets over a two kilometre strike length of the mineralised zinc-lead-copper skarn at Ilweol. PSM hopes to define drilling targets to locate additional massive zinc-lead-copper sulphides in what is a highly prospective zinc-skarn corridor.

Since our last update, there has also been action at PSM’s Eunha graphite prospect with the company confirming Resource targets from diamond holes and surface channels at the key EM anomaly.

The width of the graphitic material intersected in drilling at Eunha North is approximately 4m to 8m true width with a grade range of 2% to 4% TGC. A concentrate sample from Eunha (>95% graphite) was also despatched to Germany for spherical graphite testing.

Not only that, but this busy junior has other lithium and gold projects on the go too. So with all that on the line, what better time for an update on:

The biggest news to come from Peninsula Mines (ASX:PSM) lately has been the confirmation of an impressive exploration target for PSM’s suite of graphite projects.

In late July, PSM set a significant and high-grade flake-graphite exploration target estimate of 13 to 17 million tonnes grading 8% to 11% Total Graphitic Carbon (TGC) and containing 1.1 to 1.7 million tonnes of graphite for its 100% owned and granted Gapyeong, Yongwon and Eunha North, Flake Graphite Projects in South Korea.

The target was determined using exploration data that includes mapping and surface channel sampling, geophysical modelling of EM data and initial drilling at Eunha North — all to verify the correlation between channel sampling and EM modelling.

The news was reported by Finfeed.com: 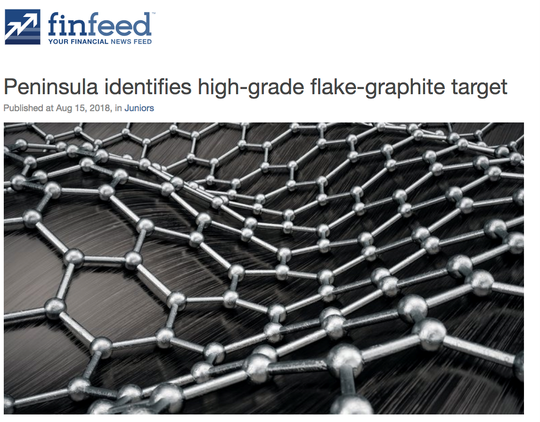 Following this milestone for PSM, the company plans to define the graphitic units at Gapyeong through drilling, since the Gapyeong project represents 85% of the overall exploration target estimate.

Drilling access agreements have now been signed with two key private landholders at Gapyeong and, subject to gaining approvals, PSM will soon be able to drill a core 240m strike length near the centre of the 1000m mapped strike extent of the targeted graphitic units.

The nature of the graphitic units suggests it is amenable to open pit and underground mining, which bodes well for PSM’s plans to supply high quality graphite to the South Korean battery industry.

Gapyeong is no doubt the star of PSM’s story at the moment, with news of the high grade channel intersections in early August.

The top results were: 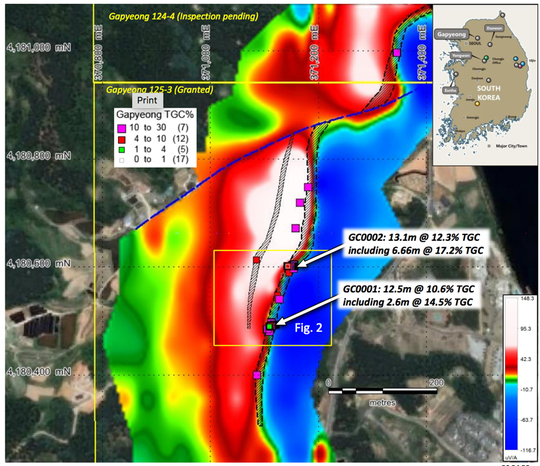 What’s left to do now, but to drill test the graphitic unit and confirm its full potential? Which is precisely what PSM plans to do.

At the same time, it’s in the process of completing spherical graphite test-work to solidify its downstream processing ambitions, with part of the tested material being sourced from the Gapyeong graphitic unit.

Key intersections from the drilling confirmed the validity of the EM anomaly target, and a concentrate sample (>95% graphite) has been sent to Germany for spherical graphite testing.

The width of the graphitic material intersected at Eunha North is now believed to be approximately 4m to 8m (true width) with a grade range of 2% to 4% TGC.

The peak intersections are summarised were:

The graphitic material intersected at Eunha North is associated with “a steeply west dipping structure/unit, hosted within a granitic gneiss unit overlain by psammitic rocks in a broad antiform”. The EM anomaly extends for a strike length of approximately 500m. 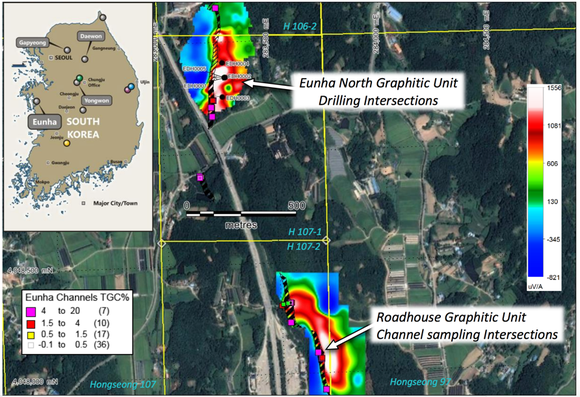 Now that PSM has an estimation target encompassing the graphite potential at Eunha (as well as its other key graphite plays), further drilling can get underway with the objective of defining a maiden Mineral Resource.

It should be noted that PSM is an early stage play and anything can happen, so seek professional financial advice if considering this stock for your portfolio.

PSM also reported channel sampling results for the Eunha Roadhouse prospect, 800m to the south of Eunha North, with samples taken from approximately 40m spacing. These initial results are from four of the seven channels, with the following being highlights so far:

All of these significant graphite intersections are important milestones, and is sure to help PSM as it goes on the hunt for downstream offtake partners.

Here is a summary of the results from drilling at Eunha: 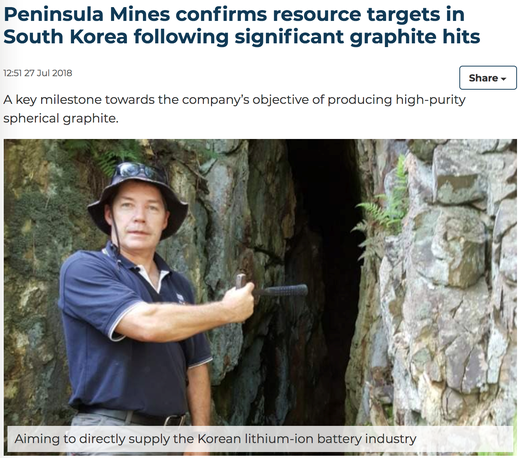 The $5.7 million-capped PSM has quite a few irons in the fire, and a comprehensive strategy for how it plans to transform the potential of its current graphite prospects into one hell of a pay-day.

For such stakeholders in South Korea, they are keen to see that, firstly, the company has its hand on some solid graphite Resources; and secondly, that it can turn those Resources into graphite that is optimal for use in lithium-ion batteries.

Which is why the junior metals play is doing everything it can be shore up its chances of convincing key off-takers that it can deliver what they want.

Of course that requires funding, and to that end, the company announced this week it had raised approximately $600,000 to fund proposed drilling at its flagship Gapyeong Flake-Graphite Project and complete the all-important testing to produce high-purity spherical graphite for the Korean lithium-ion battery market in South Korea.

Keep in mind that it is an early stage of this company’s development and if considering this stock for your portfolio you should take all public information into account and seek professional financial advice.

The news was picked up by Finfeed.com: 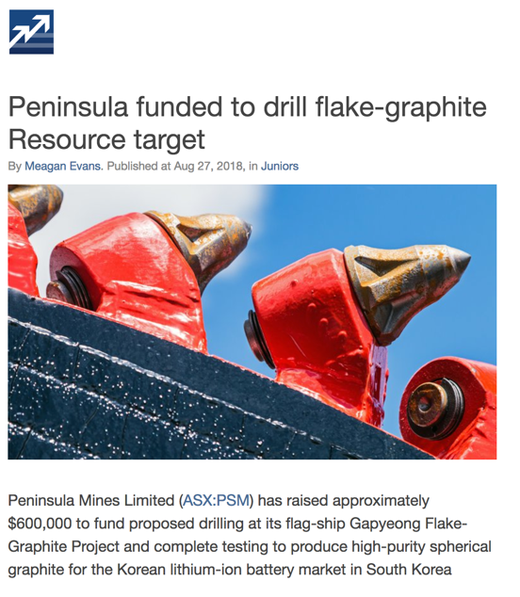 It raised the funds through a placement of shares at an issue price of 0.6 cents per share to sophisticated investors (to be supplemented by a Share Purchase Plan to raise a further $0.6-$1.0 million from existing shareholders).

The total amount raised from the Placement and SPP will be up to $1.6 million, before costs.

Beyond Gapyeong activities and graphite processing work, the company stated it would use the funds to drill test its Ubeong zinc project and/or its Osu gold-silver project.

For the short-term, its key focus is establishing its flake graphite Resource at its Korean graphite projects and completing the metallurgical testing to produce high-purity spherical graphite.

With so much going on, we will be eagerly awaiting announcements from this small cap over the next few months.