Diamond drill results led to a doubling of the share price, sending its market capitalisation above $200 million, along with talk of it being the “next Nova discovery”.

GAL’s Lantern Prospect is located just 50 kilometres along strike from LEG’s Rockford Project and is also just 100 kilometres from the Nova Nickel-Copper Project that Independence Group (ASX: IGO) acquired in its $1.8 billion takeover of Sirius Resources.

When LEG entered a trading halt ahead of announcing its drill results last year, investors desperate to get a hold of prospective Fraser Range ground turned their interest to GAL, which saw its own share price double in a matter of days, prompting a speeding ticket from the ASX.

With trading halted in LEG, investors again looked to its neighbour, GAL which was essentially being traded as a proxy for LEG.

GAL was a standout performer on the ASX on Friday, gaining as much 65% during the session, when wider market (ASX 200 Index) lost more than 5% for the day.

While it’s true that nearology plays don’t always pay-off for junior resource investors, there is more linking Galileo’s prospects to that of Legend’s — and to Sirius Resources’ famed 2012 Nova discovery too for that matter — than simply physical location.

The involvement of famed prospector Mark Creasy in these companies and in the Fraser Range and his importance here can’t be understated.

Creasy was integral to the success of the Nova discovery and also made the Fraser Range’s second significant nickel-copper-cobalt discovery to date, the major Silver Knight discovery.

This week will likely deliver a large dose of clarity around the potential at the Fraser Range Nickel Belt, with not only LEG’s drilling results, but with Galileo today providing an update on its own exploration activities at its highly prospective Fraser Range targets.

The company is one of the most active explorers in Australia. It has undertaken eight drilling programs in the 18 months since listing on the ASX and has three fully funded drilling programs (RC, aircore, diamond drilling) planned before June 30. To support these plans, GAL is in a solid cash position with $5.4 million, as of 31 December.

There are plenty of parallels between the two explorers LEG and GAL, both with potential to be the next Fraser Range Nickel Belt success story as they look to uncover high value Nova style targets.

However, of all explorers in the Fraser Range Galileo offers the most leverage to upside.

Given its relatively small market capitalisation of just $18 million, in the event that GAL makes a discovery, the payoff to shareholders will be multiples of any gains that LEG would make from a similar discovery. 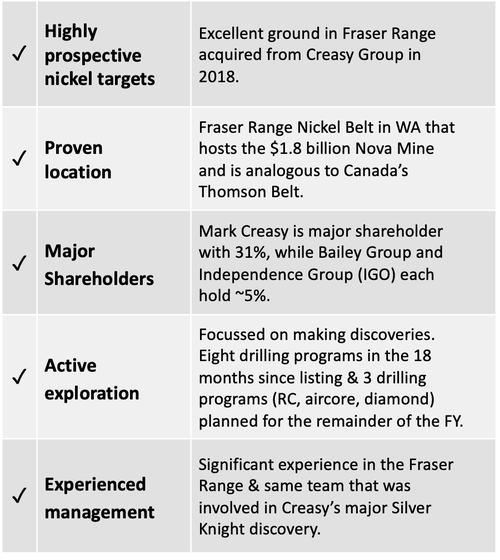 Explorers have only just scratched the surface of the Fraser Range Nickel belt, south-east of Kalgoorlie in Western Australia.

The Fraser Range was first brought to investors’ attention in 2012, with Sirius Resources’ discovery of the Nova nickel deposit — a 14.4Mt at 2.3% nickel, 0.9% copper resource.

The find triggered a stunning share price rise (from 5c to $5) and saw Sirius go on to reach a $1 billion market capitalisation before its acquisition two years later for $1.82 billion.

Now at Galileo, Underwood is exploring for a major discovery of its own in the Fraser Range.

“Good drilling results” at its Fraser Range Project and GAL could be recognised as similar to that of LEG, in the $150-$200 million region, as compared to its current market capitalisation of just $18 million.

That is a huge lift above the current market cap, yet this scenario is certainly in reach when we consider that GAL’s AC drilling results were similar to that at LEG’s Mawson prospect.

Furthermore, GAL’s ground has seen no previous nickel exploration, providing it with a first mover advantage to make a discovery on a virgin greenfields property in a prospective new nickel belt.

The greater upside of course is if GAL can go on to make a Nova style discovery – which would attract a significantly larger valuation.

Given Sirius went from a 5c share price to $5, and ultimately onto a multi-billion take over, there is plenty of upside on a discovery.

As can be seen below, GAL’s Lantern Prospect is 40km along strike from LEG’s Mawson Prospect and 100km from the operating Nova nickel mine... 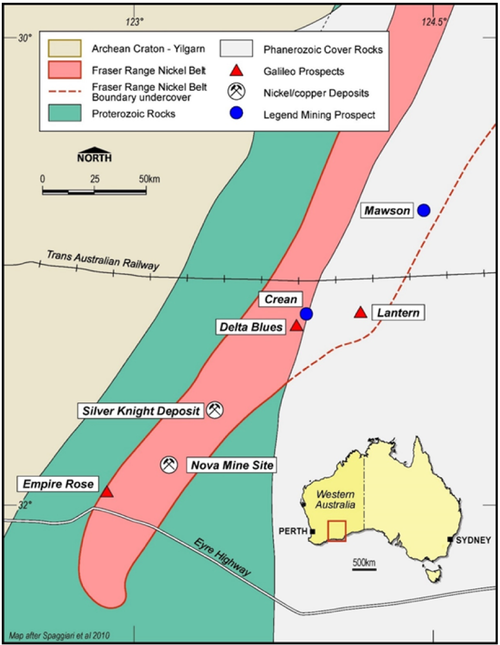 For further background on the Fraser Range Nickel belt and Galileo’s project it’s worth reviewing my last report on GAL from 3 March:

GAL’s recent drilling at the Lantern Prospect discovered a fertile mineralised system containing nickel and copper sulphides and it is now working to define the extent and quantity of the target metals.

In the following video, Galileo Managing Director Brad Underwood discusses why the Fraser Range is a major focus of activity for Galileo; the current RC drilling at the key Lantern Prospect; and the company’s upcoming drilling programs at the Fraser Range.

On 17 March, Galileo reported that a RC drill hole (LARC003) at the Lantern prospect intersected disseminated nickel-copper sulphide mineralisation and indicated the potential for a large mineralised system that has over two kilometres of untested strike length. 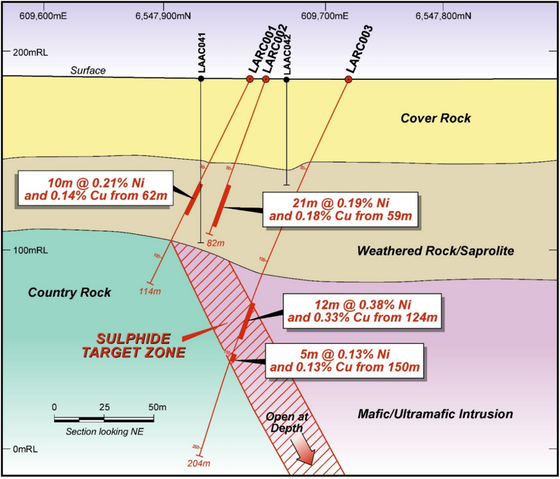 This was an excellent result from the first ever RC drilling program at the Lantern Prospect, discovering a fertile mineralised system containing nickel and copper sulphides.

News of the significant nickel and copper assay results from Reverse Circulation (RC) drilling at the Lantern prospect — sent the share price up by as much as 24% that week despite the challenging conditions in global markets, which saw the ASX200 lose almost 40% since its February peak.

The results indicated the potential for a large mineralised system with over two kilometres of untested strike length.

The RC drill hole at the Lantern prospect intersected disseminated nickel-copper sulphide mineralisation — information that the company will integrate to provide the targets for planned diamond drill hole testing.

The following Finfeed article took looked at the results... 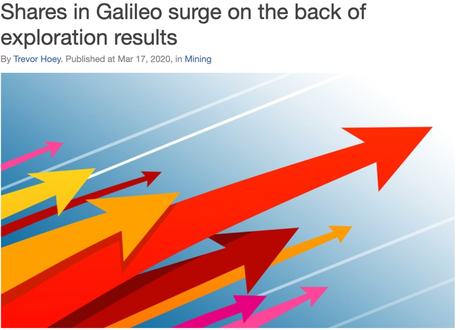 The news was widely reported across a number of other publications too ...

GAL has today provided an update on exploration activities at its highly prospective targets within the Fraser Range Nickel Belt.

The company notes that aircore drilling of magnetic targets north of the Lantern Prospect is ongoing, although a postponement of drilling is expected due to restrictions associated with COVID-19.

The image below shows the current targets with aircore drilling traverses designed to cover the area with reconnaissance drilling. 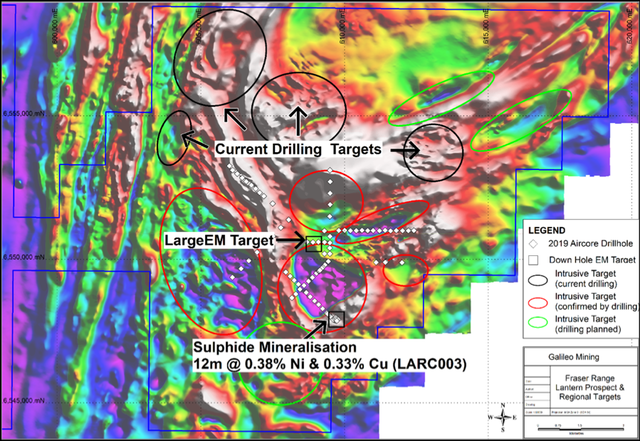 Two advanced targets already exist at the Lantern Prospect, both located on the margins of a large intrusive rock body.

The southern target has a strike length of over two kilometres with nickel-copper mineralisation identified in RC drilling. The northern target is a large EM anomaly that will be further refined with downhole EM surveying prior to drill testing.

Downhole EM surveying at both targets is planned to commence within two weeks, however the timing of this work depends on any COVID-19 restrictions that may occur over the time period.

Also underway is petrographical thin section description of rock chips from LARC003 that will assist in understanding both the style of mineralisation and the potential for large sulphide accumulations at the Lantern Prospect and within the broader area.

GAL is awaiting Program of Works applications to complete infill drilling around and along strike of LARC003 that are pending approval from the Department of Mines.Upcoming work programs include downhole electromagnetic survey at LARC003 — which intersected 12 metres of disseminated nickel-copper sulphide — with the prospect of highlighting something even bigger and better, or perhaps pointing to the prospect of a much larger mineralised zone. This downhole EM surveying of LARC003 is planned to commence in two weeks, subject to COVID 19 restrictions.

Following this, Galileo intend to undertake diamond drilling of key targets with the potential of uncovering a discovery hole.

Commenting on the Fraser Range exploration program Galileo Managing Director Brad Underwood said; “With our first RC program we have shown that our ground contains nickel-copper sulphides. While we wait to complete downhole EM surveying of the mineralised drill hole we will continue to build a pipeline of targets with aircore drilling.

“Our ground has had no previous nickel exploration providing Galileo with a first mover advantage to make a discovery on a virgin greenfields property in a prospective new nickel belt.” 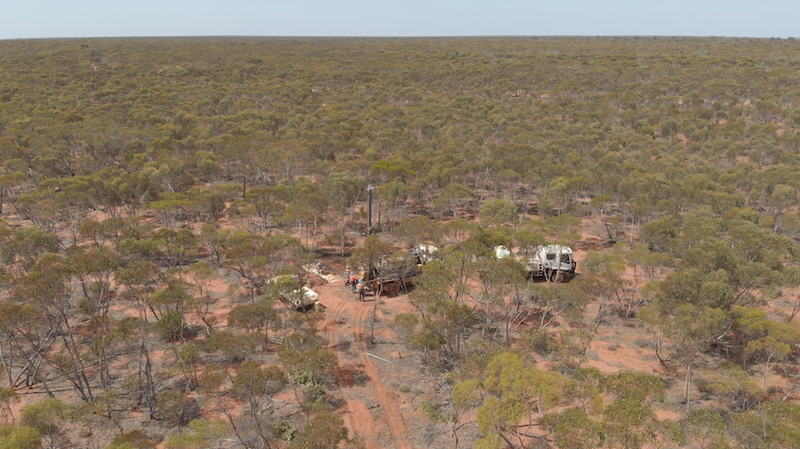 Galileo is well funded to continue exploration with $5.4 million in cash as at 31 December 2019. This puts the company in a very secure position in a period of serious economic uncertainty due to the Corona virus.

It continues to undertake large amounts of active exploration in the Fraser Range Nickel Belt, with focus for the first half of 2020 is on the drilling of Fraser Range prospects in the search for high value new discoveries.

The explorer is targeting new nickel sulphide discoveries and while the exploration results to date have been highly encouraging, as exploration continues results could prove to be a major catalyst as attention focusses in on the Fraser Range.