Minbos Resources (ASX: MNB) is sitting on a large phosphate resource in Angola that has the potential to dramatically transform the country’s food security and crop yields.

Phosphate is a key ingredient in fertiliser, and MNB's world-class phosphate ore project within the Cabinda Province of Angola, will mine the raw phosphate rock, then truck it to a major Angolan port via existing infrastructure.

At the port, it will be enhanced and sold as a blended product to agricultural distribution networks across the country.

MNB has been working on the Cabinda Phosphate Project for years and is working closely with the Angolan government, which is desperate to reduce its reliance on imported foods and is thus highly supportive of its agricultural industry and any companies that can help deliver food security to its population.

Minbos won an international tender for the Cabinda Phosphate Project in March 2020.

Along with its in-country partner Soul Rock Ltda (15% carried interest), Minbos won the tender based on producing Enhanced Phosphate Rock as a substitute for fertilisers currently imported by the Angolan Government for distribution to wholesalers and farmers.

The Mineral Resource for its Cacata Phosphate Rock Deposit within Cabinda stands at 27Mt @ 17.7% P2O5, with 15.2 Mt at 24% in the Measured & Inferred Categories, and A$20M in previous expenditure has already been invested in the project.

Cácata is well supported by key infrastructure. The deposit is situated within a kilometre of a dual lane highway and a sixty-minute drive to Porto de Caio, a billion-dollar port and industrial development.

Porto de Caio provides the ideal location for a granulation plant with a natural gas terminal and power station within five kilometres and access to a port for barging product to local and regional markets.

This is important because fertiliser consumption on the African continent is projected to reach 13.6 million tonnes by 2030. Producing fertilisers locally will improve the availability of nutrients, reduce transport costs, and protect against exchange rate fluctuations.

It may also mitigate the high cost of imported fertiliser, which is contributing to the issue of low crop yields.

Results of a Scoping Study released demonstrate the company could generate strong cash returns on the Project for a relatively small capital investment.

The pre-production CAPEX is between US$22-28M, which is not a lot to get the project into production – and the payback period is just three years, with a Life of Mine (LoM) of 21 years.

These financial metrics are compelling when compared to the company’s current market cap.

The company is working on an offtake agreement with the Angolan government.

If successful, this could prove to be a major share price catalyst, substantially de-risking the need for development funding for the project.

MNB has also announced a MoU with the International Fertiliser Development Centre (IFDC) to develop and grow the smallholder farmer market in Angola.

The IFDC is dedicated to global food production and empowering farmers to increase crop yields… by using fertiliser.

It has also strengthened its board. Looking at their skill sets, it clearly signals that MNB is serious and ready to move to the next phase in developing their project.

Meet the new board members:

Investors are increasingly confident that MNB will be in a position to move into production by late 2021 / early 2022.

Why we have invested... 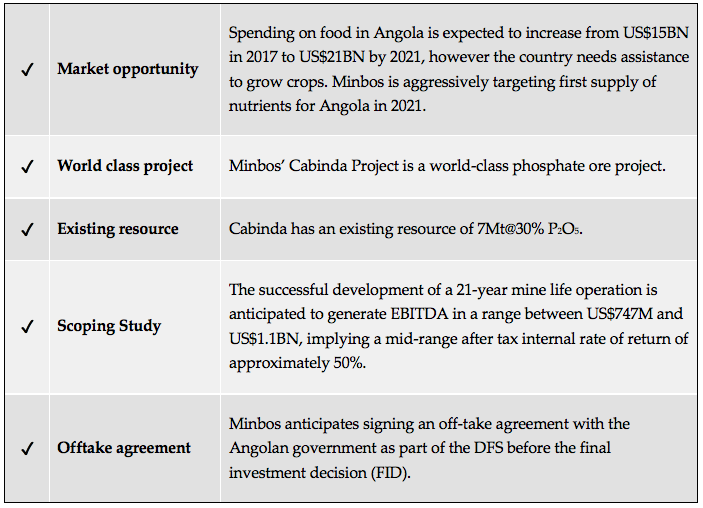 We Just Invested More in this Stock ... ... plus what's happening with VUL and EXR?

We just increased our investment in Minbos Resources (ASX:MNB). MNB has announced the completion of a $7.3M cap raise at 8c, which the company said was oversubscribed.

The Most Undervalued Stock In Our Portfolio

EMERGENCY INFO: Read if you Invested in Minbos