Just days after revealing that its Broken Hill Project has the same geology as Cobalt Blue’s (ASX:COB) Thackaringa Cobalt Project JV (and 100% ownership compared to 51%), Castillo Copper (ASX:CCZ) has released further good news pertaining to its Cangai Copper Mine.

COB recently signed a cobalt offtake deal with global giant, LG International, to the tune of US$6 million+.

CCZ has a lot of work to do before it can even consider making a deal like the one mentioned above, so investors should seek professional financial advice for further information before making an investment decision.

There is a great deal of upside at Broken Hill, however it is CCZ’s Cangai Copper Mine that is currently producing the results and recent assay results tell us that it too just happens to be comparable to a mining giant, namely the $1.3 billion Sandfire Resources (ASX:SFR).

With that in mind, let’s have a quick catch up with CCZ:

It was just last week that we caught up with CCZ, but already there has been a big breakthrough for the company.

Phase 1 drilling results at Cangai illustrate the similarities between CCZ and Sandfire, with both projects carrying supergene ore and high-grade copper.

Interestingly, the market reacted well to Sandfire’s news two days ago that aircore drilling at its East Morock Well Project had intersected narrow zones of sulphide and supergene copper mineralisation.

Supergene ore can be shipped directly to key export markets at relatively low cost via excellent infrastructure already in place. This could give CCZ a competitive advantage.

With that in mind, let’s look at CCZ’s results, which show thicker intersections.

The completion of Phase 1 drilling at Cangai, which comprised 18 holes along the line of lode targeting deeper sulphide mineralisation, has successfully concluded with assays confirming extensive mineralisation outside the JORC modelled zone.

“The first round of drilling at Cangai Copper Mine, which specifically targeted deeper sulphide mineralisation, has been highly successful, evidenced by some encouraging copper-zinc-silver assay results,” CCZ Chairman Peter Meagher said.

The diagram below illustrates the completed drill holes: 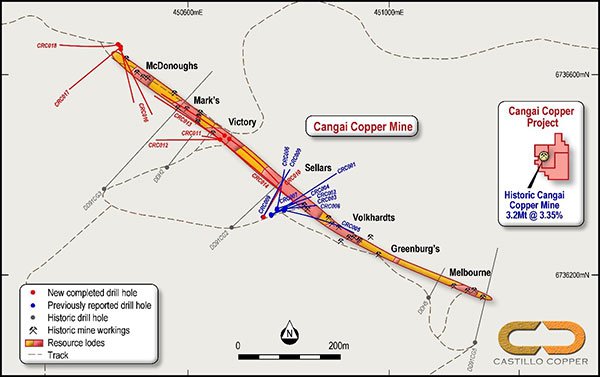 Results show that new mineralisation outside the JORC modelled envelop was discovered at CRC013, CRC016-18 drill-holes, while the DHEM identified an anomaly near CRC005 drill-hole as seen below. 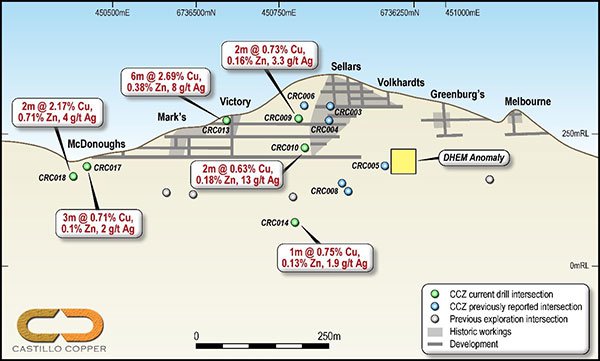 The anomaly is expected to have a larger concentration of sulphides and is immediately along strike to the east of the CRC005 drill-hole. Subsequent drilling campaigns will investigate the likelihood of higher copper-zinc-silver grades.

This drilling campaign has confirmed the integrity of the JORC modelled zone and uncovered new extensions that warrant further investigation. Based on current evidence, Cangai is likely to be re-opened.

Although it should be noted that this is still speculative and investors should seek professional financial advice if considering this stock for their portfolio.

With Phase 1 now complete, CCZ will turn its attention to the next segment of its drilling campaign, which will focus on shallower supergene ore near the legacy workings.

CCZ has submitted an application to the regulator for a 39 drill-hole campaign and appointed a drilling contractor. Once approval is confirmed, CCZ will deploy to site to commence preparations for the campaign. The company is currently looking at ways to fast track the approval process.

The first target area is the large legacy stockpile near Smelter Creek, so that it can be JORC modelled as quickly as possible to determine the extent of contained copper-zinc-silver.

Here’s a look at CCZ’s ore from its smelter creek stockpile: 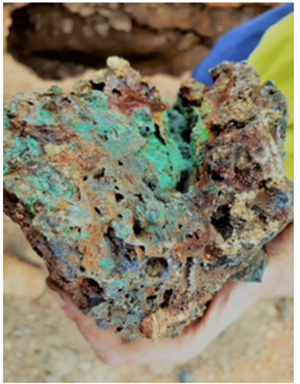 The fact CCZ has this stockpile is important, not least because the CCZ Board has held discussions with prospective customers interested in reviewing stockpile samples and committing to off-take agreements if the metallurgy stacks up.

In fact, CCZ is already in discussions with an international metals trader and third-party processor based in NSW that are interested in purchasing rights to all the stockpiles.

To further enhance the understanding of the stockpiles, and build on metallurgy test-work currently underway, several drill-holes are planned for the Smelter Stockpile site. The geology team will then target modelling up a JORC compliant Resource.

CCZ has a lot to look forward to.

“Moving forward, the next drilling campaign, which is set to commence once regulatory approval is secure, will be more key to determine the extent of any resource size upgrade as it is designed to target supergene ore near legacy workings.

“The Board is continuing to work towards finding an optimal solution to monetise the legacy stockpiles, especially with prospective buyers having already flagged interest,” Meagher concluded.

The results CCZ is releasing come at a time when close to half of all mined cobalt is used to produce electric vehicle batteries and power electronics. In fact, the global EV battery market set to grow at a compound annual growth rate (CAGR) of 42% in the five years from 2017 to 2021.

CCZ will look to capitalise on not only the similarities it has to much larger peers, but also on current market dynamics.