A couple of weeks ago we announced our new investment in early stage explorer BPM Minerals (ASX:BPM) and today it announced completion of a site visit, off the back of yesterday’s key drill results from neighbour Rumble Resources.

We promised to do a deeper dive analysis on BPM (which is coming soon) but in the last 24 hour BPM’s $293M neighbour Rumble released more drilling results which has positive implications for BPM... the news was solid but Rumble recently raised $40M at 50c - which dampened the share price reaction to around that level.

Also, this morning BPM announced it has completed a site visit to the Earaheedy Basin (home to its lead-zinc project) and appointed experienced geologist Oliver Judd as exploration manager.

So before we send our deep dive analysis, here is our quick take on the last 24 hours for BPM.

Yesterday Rumble released solid results showing thick lead zinc intercepts, but not as much high grade as the initial results. Rumble recently raised $40M at 50c/share, so while the results were solid, it looks like a few of the placement participants may have been selling.

The best thing about Rumble’s results yesterday (for BPM) is that it demonstrates an extensive system and reinforces the SEDEX type of deposits which could feasibly occur at other locations in the Basin... so not only on strike at BPM’s Hawkins project, but also at Ivan Well and Rhodes. 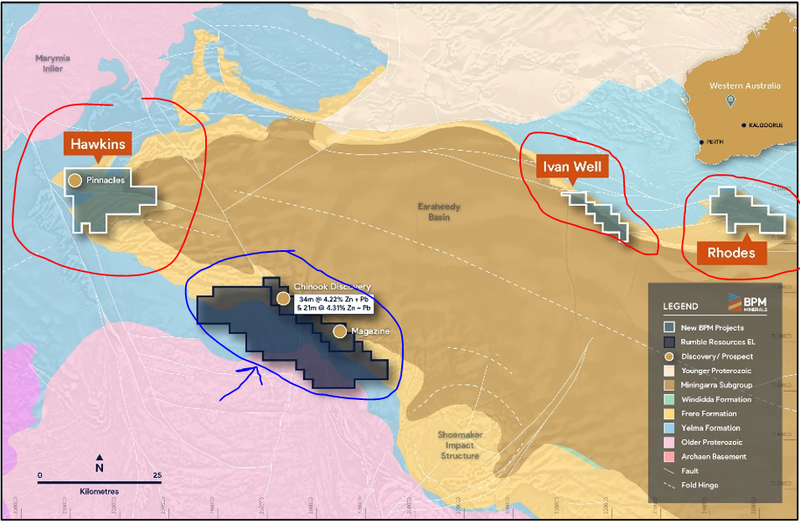 According to our expert geologist, BPM’s ground appears to have all the right rocks/structure/faulting that has been highlighted by Rumble in their last announcement which in their opinion overall enhances BPM’s ground.

SEDEX deposits are a big deal for lead and zinc explorers.

SEDEX deposits account for 25% of the world’s lead and zinc production, and they hold more than 50% of the world's lead zinc resources.

They form Giant and Super Giant Tier 1 deposits, and 6 of the 10 largest zinc mines globally are SEDEX style deposits.

So if you can find a new one - they can prove to be extremely valuable.

So what is a “SEDEX deposit” and why is it big news for BPM?

(Apologies in advance to any geologists out there for this over simplification).

A SEDEX deposit occurs when mineralising fluids push upwards in the ground combined with heat - this push occurs in specific basins/faults (like the Earaheedy basin for example).

SEDEX is short for sedimentary exhalative and are host to some of the largest zinc accumulations worldwide.

The nature of a SEDEX formation is that mineralisation appears in clusters, so if you find one, it is likely there will be more nearby in similar rock formations with a basin.

This is why Rumble’s latest news bodes very well for BPM, who has THREE tenements in the same basin AND the same rock formations on what Rumble now reckons looks like a SEDEX lead zinc deposit.

So Rumble might have stumbled onto a giant SEDEX Lead-Zinc Deposit, which means that the deposit might extend to the entire Earaheady basin - which is great news for $20M BPM if they can get a hit on their upcoming drill campaign.

BPM today released news of a completed site visit out to the Earaheedy Basin, where the CEO Chris Swallow and newly appointed exploration manager Oliver Judd identified the exact rock formations that are analogous to Rumble’s lead zinc discovery.

BPM reports that it found the same “stratigraphic units and unconformity” as Rumble’s Chinook discovery at BPM’s Hawkins ground.

While to the untrained eye (including ours) this photo pretty much just looks like a dude standing on some dirt, it’s actually on the exact geological formation in the same basin as where Rumble found their multi hundred million dollar SEDEX lead zinc discovery: 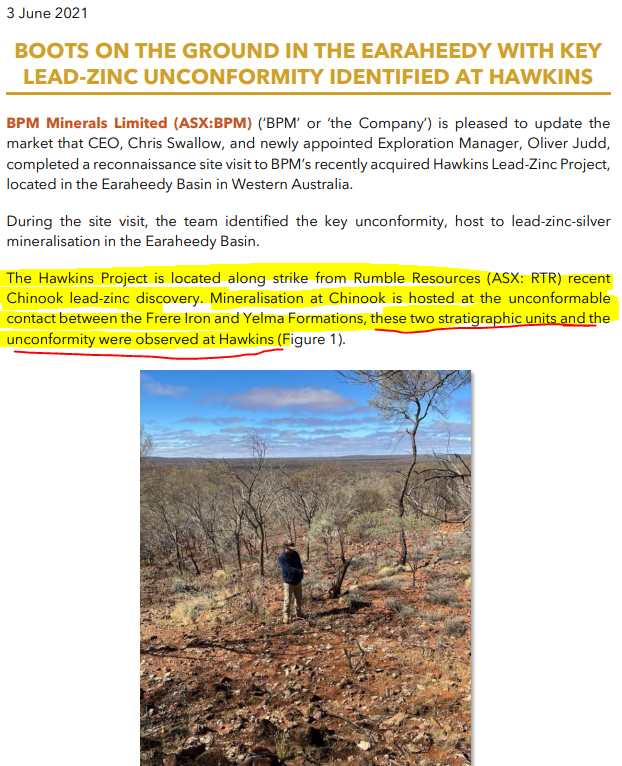 Here is a video of the visit:

Last month $20M capped BPM announced the acquisition of projects near $293M lead-zinc discovery, one project is just 40km away along strike.

Prior to BPM’s acquisition, a company called Rumble Resources 8 bagged from 10c to a high of nearly 80c, after hitting not one, but two high grade lead-zinc drill results.

Rumble had been hovering around 70c (a $440M market cap) in recent weeks as it awaited more drilling results...

Rumble now looks to be settling around 45-50c as the recent $40M placement at 50c washes through.

Here is Rumble's chart - no prizes for knowing exactly when the discovery was made: 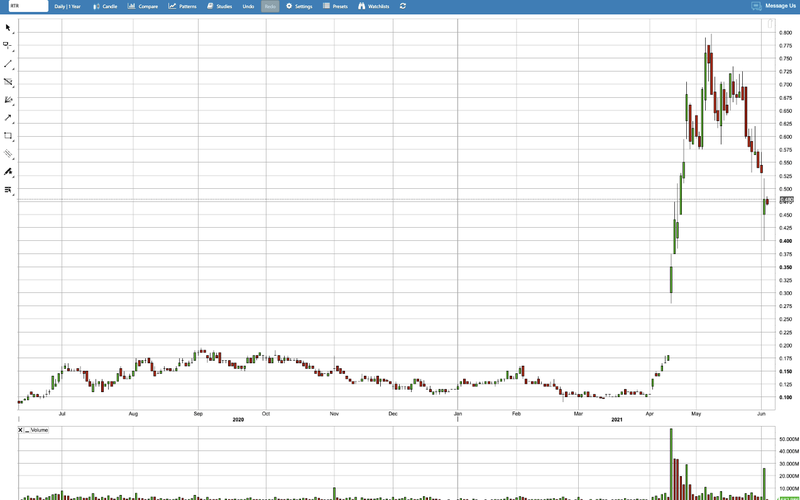 We invested in BPM who now has exploration permits (granted and applied for) right near Rumble and will also commence looking for lead-zinc.

Now keep in mind, this is early stage exploration where our strategy is to invest early and wait for a price rise in the lead up to drilling and aim to free carry into the result.

We want $20M capped BPM to find a similar discovery to Rumble. 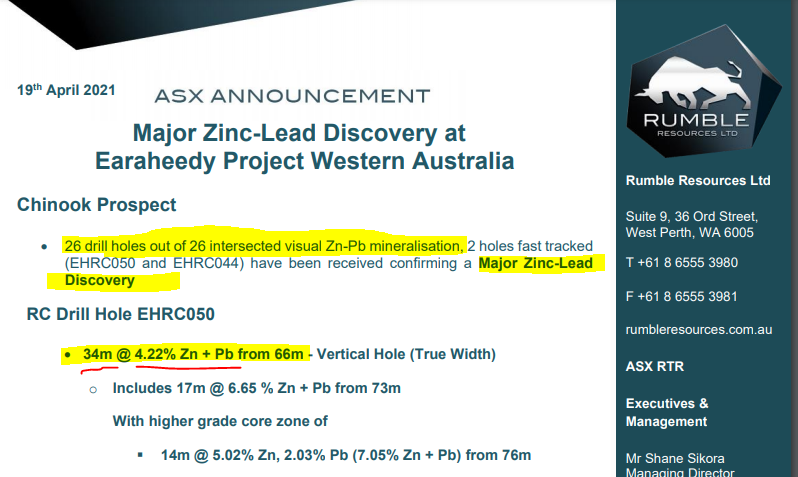 Here are the tenements and the location of BPM’s new projects relative to Rumble:

All of BPM’s new projects are the stratigraphic equivalent of Rumbles’ discovery - this is geologist speak for “all of BPM’s projects (circled in red) are on the exact same subdivisions of rock layers based on the age of the rock as Rumble’s big discovery (circled in blue).”

It’s early days, and there is some work to do, but at this stage, this is the BPM drill target that we like the most - its called Pinnacles and it sits in the Hawkins tenement, on strike from the Rumble discovery: 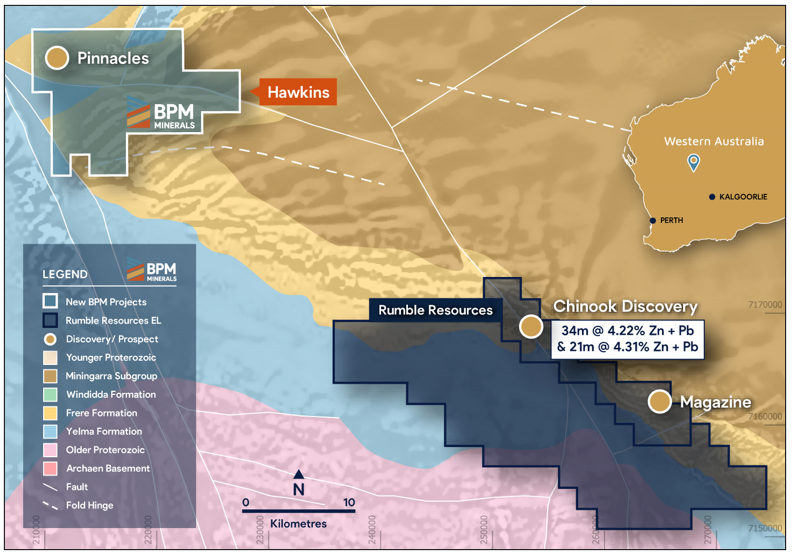 Back Story: So how did BPM get this project near Rumble’s $293M discovery?

As soon as Rumble 8 bagged from its hit huge lead-zinc discovery in the Earaheedy Basin - every single bit of land around it was instantly snapped up by explorers hoping to find similar valuable ground.

ASX exploration aficionados remember the same thing that happened when Sirius made its $1.8BN discovery in the Fraser Range, and when Chalice made its $2.4BN PGE-Ni-CU discovery in the Julimar Province (we are invested in both PUR and GAL too).

Smart geologists and prospectors snap up all the geologically similar land around the discovery - but may have to pay overs following a massive discovery nearby.

The luckier geologists are already positioned BEFORE the discovery, when no one is looking at the region.

A geologist we follow closely in the space, Brendan Borg, happened to already privately own and have applications pending for prime permits in the Earaheedy Basin, but was actually looking for iron ore and manganese at the time...

Turns out these permits are the stratigraphic equivalent of the Rumble discovery - so obviously the search for lead-zinc on the permit has become a priority, and already having the permits was a huge win.

When you have an exploration permit you are allowed to explore for anything on that land, so switching focus from iron ore-manganese to lead-zinc is allowed.

Yes - but we always welcome a bit of luck in the early stage exploration game.

So the next step was to get this project into a listed vehicle (BPM Minerals), re-interpret the historical data for lead-zinc and start exploration drilling as soon as possible.

We are glad to be on the ride and hope this string of luck can continue.

If Rumble’s rapid 8 bagging on a lead-zinc discovery isn't enough to get the blood flowing, here is why lead-zinc matters in the metals markets: 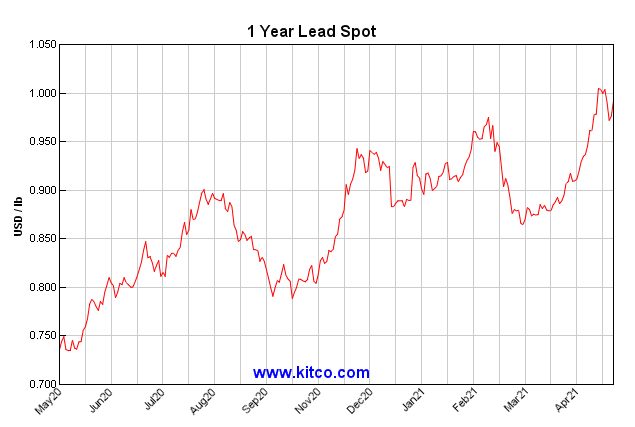 Most zinc is used to galvanise other metals, such as iron, to prevent rusting. 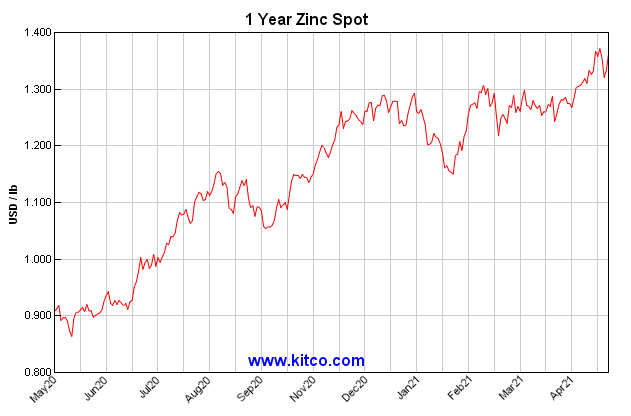 All commodities seem to be surging up, so we think it’s a good time to be in a few explorers leveraged to discovery success - we are hoping for a “stronger for longer” commodities super cycle for a few years - now that would be grand for exploration investors.

Always keep in mind that commodity prices might come back down too and there could be no super cycle - which wouldn’t be fun.

Our Investment Plan for BPM

Our plan is broadly the same for all of our early stage explorers.

Just like we did with 88 Energy, we invest early, patiently hold in the lead up to drilling, free carry and take some profit before the drill and hold a significant position for drilling results. 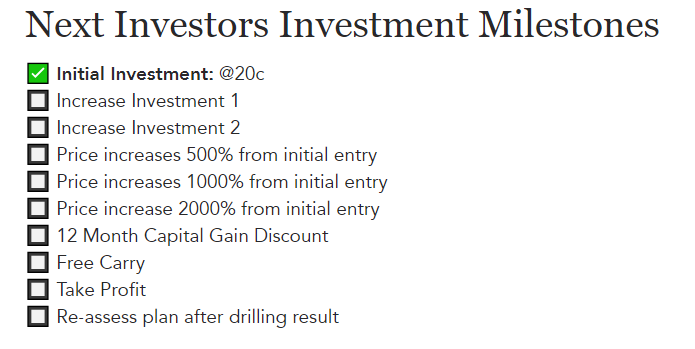 Here is what we are watching out for at our favourite drill target, Pinnacles at the Hawkins Permit: 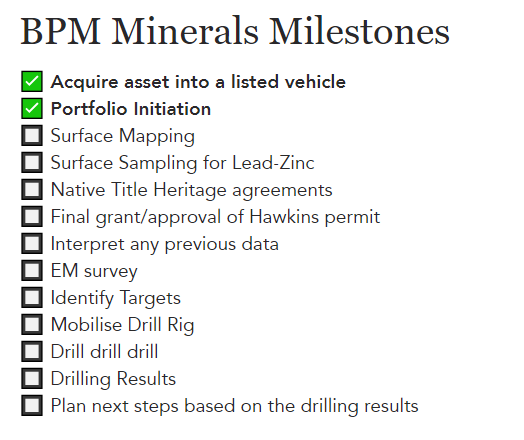 BONUS: What else does BPM have to keep us entertained till lead-zinc drilling at Hawkins?

Quite a lot actually...

We have primarily invested for the drilling of Pinnacles at Hawkins and the other lead zinc projects - but BPM has other really interesting assets - we will give you a deeper dive on those in our in depth analysis in the coming weeks.

In summary, here are the other assets BPM has:

Our main reasons for investing in BPM is to emulate Rumble’s $293M discovery with lead zinc drilling, holding patiently for BPM’s drilling event in late 2021.

BPM Minerals Ltd (ASX:BPM)
The full year results are in, how did our telco investment VN8 fare?